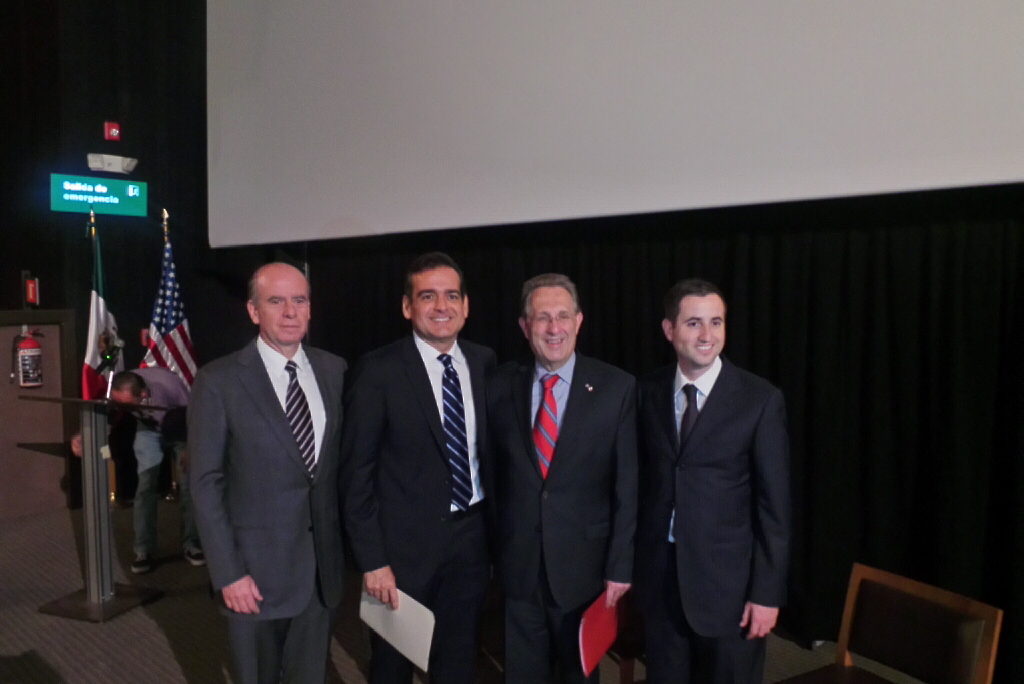 Mexico City, April 30, 2014 – In celebration of World Intellectual Property (IP) Day, U.S. Ambassador Anthony Wayne and the United States Patent and Trademark Office (USPTO), in collaboration with the Motion Picture Association (MPA) and the National Chamber of Cinematography and Videogram Industry (CANACINE) hosted a movie screening and forum to highlight the importance of intellectual property to the movie industry.   This year marks the 14th annual celebration of World IP Day which recognizes the founding of the World Intellectual Property Organization in 1970. The theme for this year’s celebration is “Movies: A Global Passion.”  The event included remarks by U.S. Embassy officials, local movie representatives and a screening of the soon-to-be-released film Cantinflas.

Addressing a diverse crowd of Mexican government officials, IP practitioners and business associations, Ambassador Wayne highlighted the social significance of movies and how intellectual property is an essential ingredient in the movie-making process.  The Ambassador remarked, “This year’s theme, “Movies: A Global Passion,” is particularly fitting as movies are a global enterprise and tend to bring very diverse audiences together to enjoy the creativity of producers who rely on the protection of intellectual property in order to share their art with the world.”  Ambassador Wayne also noted the historical relevance of movies in Mexico, “The history of cinema in Mexico goes all the way back to 1897 when Salvador Toscano Barragan opened the country’s first public movie theater at 17 Jesus Maria Street, just blocks from the Templo Mayor.   From the days of the first theaters, to the introduction of sound, color and special effects, it is important to recognize the interplay between these industry innovations and intellectual property.”

Ambassador Wayne shared the opening stage with Vidal Cantu, the producer of the film Cantinflas.  Mario Moreno “Cantinflas” is a beloved Mexican comedian who starred in many movies throughout his career.  The Cantu-produced biopic follows Cantinflas on his journey from Mexico to Hollywood, U.S.A. in an attempt to make it big in the movie industry. The movie also showcases the deep social and economic ties that have bonded the U.S. and Mexico for decades. Mr. Cantu noted, “A movie, from its script to its screening by any means, is the art of incorporating in a final work the Intellectual Property of many, many people that are involved in each step of the creative process, protecting their rights, does not only guarantee the sustainability of the cinematographic industry, Intellectual Property is the heart itself of many industries.”