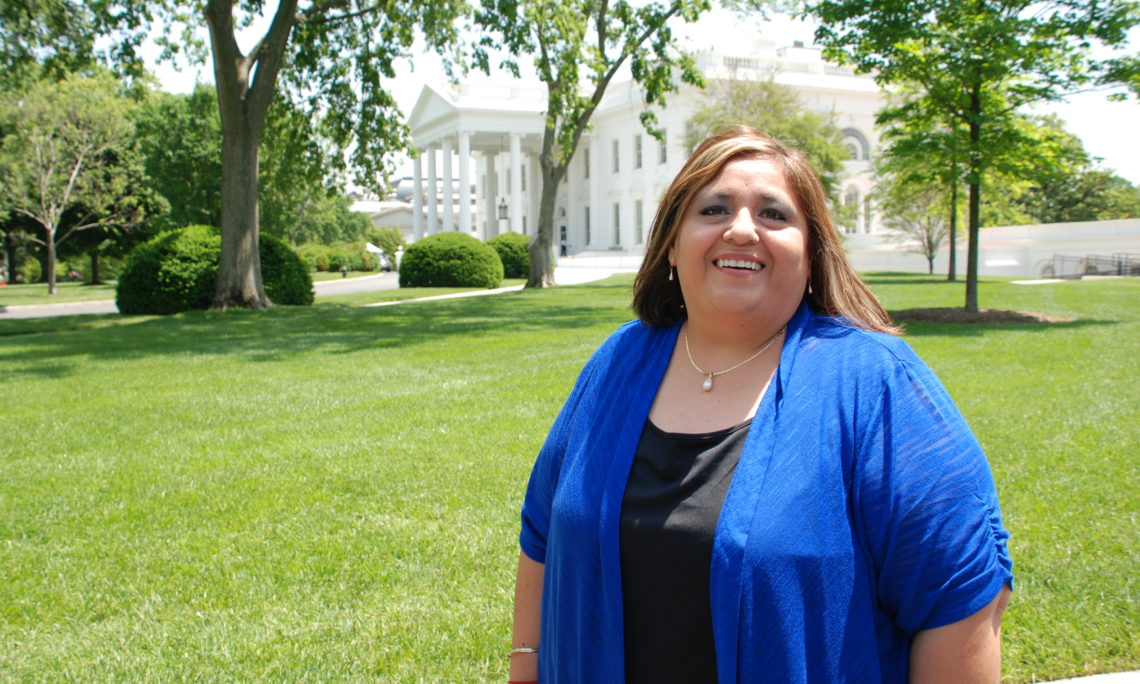 WASHINGTON, D.C., May 20, 2015 – Today during a ceremony at the White House, National Drug Control Policy Director Michael Botticelli honored Nora Gallegos as an “Advocate for Action.” Every year, the White House Office of National Drug Control Policy recognizes leaders who are making a difference in their communities through advocacy or direct services. Their work supports the Administration’s efforts to reduce drug use and its consequences through a public health and public safety approach.

Nora Gallegos has worked for more than 25 years with community, public, and international organizations to create awareness in social and political conditions to empower people and ensure safe and drug-free environments for future generations of young people.

Ms. Gallegos has been General Coordinator of the Red de Coaliciones Comunitarias (Network of Community Coalitions) Mexico under the umbrella of two organizations: Alliance of Border Collaboratives and Programa Compañeros, A.C. She and her team have worked with Community Anti-Drug Coalitions of America (CADCA) to strengthen capacity-building practices for improving community involvement. Her group also has worked with the Mexican government through the National Commission against Addiction.

The coalitions have made a positive impact in substance use prevention and addressing violence and crime, in some cases taking control of spaces in decay or previously overrun by gangs. The U.S. and Mexican governments have provided resources to the Coalitions Network to develop a second phase and expand its reach into 7 states and 11 cities, for a total of 21 new coalitions. The Network has also developed tools to assess coalition readiness and implementation of their action plans. The results show that member coalitions have held more than 400 activities, some including as many as 1,000 participants. Ms. Gallegos is currently developing a methodology to link anti-drug community coalitions and drug treatment court activities.

“I am pleased to honor the work Nora Gallegos is doing to make our communities healthier and safer,” said Director Botticelli. “By promoting evidence-based prevention, treatment and recovery efforts, Advocates for Action are helping to reduce drug use and its consequences.”

“The Mexican Community Coalition Network is actively recovering cultural and social values, building trust among neighbors in highly vulnerable communities,” said Ms. Gallegos. “Residents have taken control of spaces previously overrun by gangs and drug traffickers. Families have gotten involved in substance abuse prevention strategies to reduce the negative impact of drugs. Youth have become aware of the risk in their environment and have transformed their lives, choosing their friends carefully while acting as positive role models.”

The Obama Administration’s budget for fiscal year 2016 contains more than $12 billion for reducing drug use in the United States through prevention and treatment programs – an increase of more than $768 million over the fiscal year 2015 enacted level.  Combined with supply reduction funding, a total of nearly $27.6 billion dollars was requested for Federal drug control programs for 2016. This budget demonstrates the Administration’s ongoing commitment to a science-based drug policy with a balanced approach to public health and public safety.

For photos and videos of the 2015 Advocates for Action, please visit: https://www.whitehouse.gov/ondcp/national-drug-control-strategy/advocates-for-action-2015

For more information on ONDCP’s work to reduce drug use and its consequences, visit: http://www.WhiteHouse.gov/ONDCP