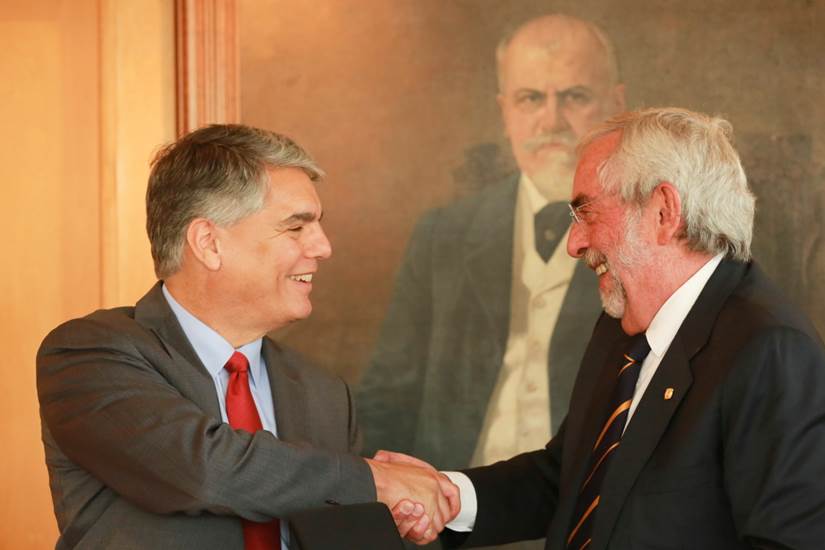 Austin, Texas and Mexico City, November 16, 2017—The University of Texas (UT) is deepening its historically strong relationship with Mexico by opening an office in Mexico City at the Universidad Nacional Autonóma de Mexico (UNAM). With new staff on the ground in Mexico, UT plans to expand collaborations with Mexican educational and scientific organizations.

The office at UNAM will house The University of Texas at Austin — Mexico Institute, a Mexican nonprofit organization established in May 2017 to promote UT’s scholarly research inside and outside the country. The institute’s staff will work with researchers in Mexico and Texas to pursue projects in science, technology, engineer­ing and math (STEM), and also scholarly and cultural studies.

“Mexican students, researchers and institutions are vital as The University of Texas addresses important issues that affect both Mexico and Texas,” said Gregory L. Fenves, president of the University of Texas at Austin. “For decades, UT has worked closely with Mexican scholars, as well as with public and private sector stakeholders on educational programs and research. By opening this office, the university plans to become an even closer partner with Mexico, building on existing relationships and developing new ones to expand opportunities in education and research.”

As a demonstration of the university’s expanding ties to Mexico, today Dr. Dan Jaffe, UT’s vice president for research, signed an academic and research agreement with Mexico’s oil and gas regulatory commission, Comisión Nacional de Hidrocarburos (CNH). Under the agreement, UT will support Mexico in the sustainable development of its hydrocarbon resources.

The University of Texas, which has seven student exchange programs in Mexico, is one of the top educational destinations for Mexican students. UT has 550 Mexican students and ranks No. 7 among U.S. universities for students with scholarships from Mexico’s Consejo Nacional de Ciencia y Tecnología (CONACYT). UT has more Mexican scholars with Fulbright fellowships than any other American university. Working jointly with Mexican universities, UT offers professional degrees in the country in business, technology and law.

For more than 50 years, UT has collaborated on major research programs with Mexican institutions. Recent successes include a joint survey of the Chicxulub meteor impact, electricity projects with the Mexican government, and a range of science projects enhancing health sciences, coastal fisheries and the environment.

For more information, contact: Jorge Piñon, The University of Texas at Austin, 306-926-6910,jrpinon@austin.utexas.edu.