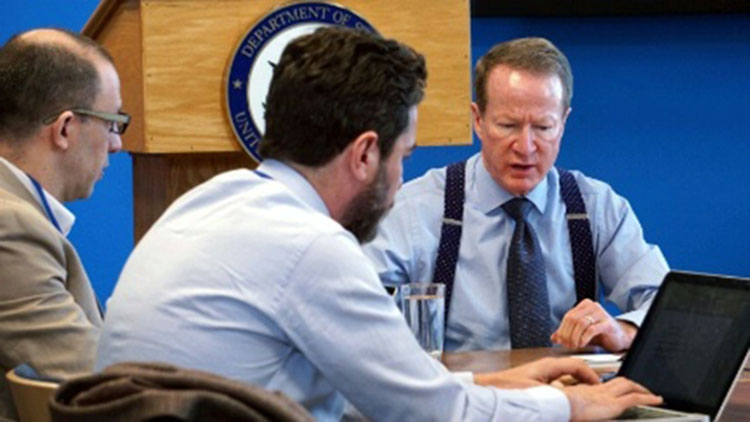 Mexico City, March 2, 2016 – Ambassador William R. Brownfield, Assistant Secretary for International Narcotics and Law Enforcement Affairs (INL) at the U.S. Department of State, and Michael Botticelli, Director of National Drug Control Policy, visited Mexico City March 1-2 to discuss issues of common interest, including ways to stop the illegal flow of narcotics between Mexico and the United States.  During their two-day visit, the U.S. officials explored ways the two countries can continue and expand cooperation on this important issue.

The United States and Mexico are working together to increase the capacity of both countries’ law enforcement, justice and public health institutions to reduce the negative societal effects of drug use, particularly heroin and methamphetamines. As part of its balanced approach to drug policy, the United States has significantly increased funding for prevention and treatment to reduce domestic demand for illicit drugs.  In Mexico, Mérida Initiative funds are being used to support the training of Mexican law enforcement officials, advance the establishment of Drug Treatment Courts, and train and certify drug treatment counsellors.

Brownfield and Botticelli met with partners at various Mexican government agencies, including Attorney General Arely Gómez González; Manuel Mondragón y Kalb, Commissioner at the National Commission Against Addiction (CONADIC); Carlos Pérez-Verdía, Undersecretary for North America, and Miguel Ruiz Cabañas, Undersecretary for Multilateral Affairs and Human Rights at the Secretariat of Foreign Affairs (SRE), and David Garay Maldonado from the Secretariat of Government (SEGOB), and others.

At the conclusion of the two-day visit, Ambassador Brownfield expressed the commitment of the United States of America to support anti-narcotics activities on both sides of the border.  “The United States Government will continue to share information with our Mexican counterparts as the U.S. and Mexico work together to tackle the shared challenge of drug use and the illicit drug trade.”

“The United States is facing an opioid epidemic. President Obama has focused resources and efforts in preventing drug use before it begins and expanding access to treatment on the demand side, as well as targeted enforcement and interdiction on the supply side.  In order to reach those goals, we look forward to working hand-in-hand with our Mexican counterparts to take actions that will help tackle the public health and public safety challenges that both of our countries face,” said Director Botticelli.

Mexico’s Undersecretary for North American Affairs, Carlos Pérez-Verdia added, “The United States and Mexican governments are important partners in a shared effort to tackle the issue of illegal narcotics, from both the supply and demand sides.”

The Merida Initiative is a bilateral security cooperation agreement between Mexico and the United States, with USD 2.3 billion in appropriated funds from the U.S. Congress. Through eight years of implementation, the Merida Initiative has led to greater cooperation between the U.S. and Mexico, and has provided tangible support to Mexico’s law enforcement and judicial institutions, helped to counteract the illegal trade in narcotics, and to strengthen border security. To date, the Merida Initiative has delivered more than USD 1.4 billion in equipment, training, and technical assistance to support Government of Mexico efforts to enhance security

The Obama Administration’s national drug control policy is based on a balanced approach to public health and public safety to reduce drug use and its consequences. This is represented in the President’s 2017 Budget, which calls for the Nation’s largest investment in treating and preventing substance use disorders and funds public health and public safety efforts at near-identical levels.