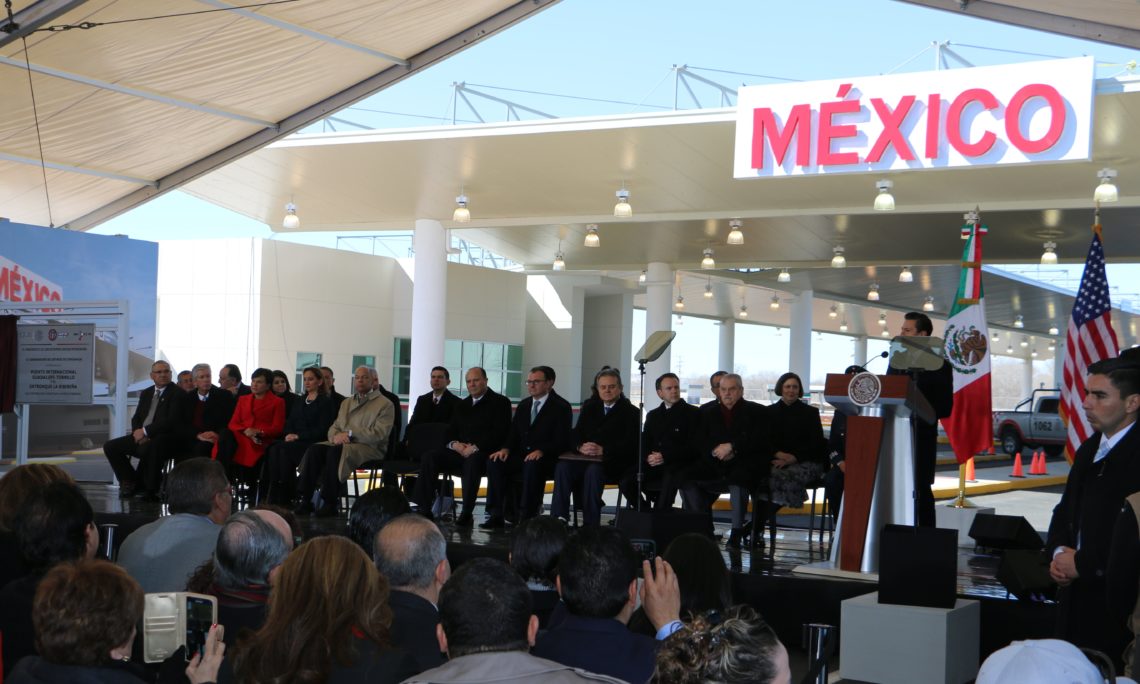 Inauguration of Tornillo-Guadalupe Port of Entry

The Tornillo-Guadalupe project, which broke ground in July 2011, is designed to enhance international trade, improve environmental conditions, and alleviate congestion in the El Paso-Ciudad Juarez metropolitan area. The project will increase capacity and lanes on the bridge and at the port of entry and introduce commercial traffic, in addition to pedestrian and personally-owned vehicles, to cross between the United States and Mexico.

“More than 3,000 trucks cross the Rio Grande every day, carrying Made-in-America products to customers in Ciudad Juarez and transforming El Paso into a North American commercial hub. The new international bridge and port of entry facilities will increase capacity, open a new path to Mexican customers, provide relief to the long lines and congestion often experienced in this region, and make our border more secure,” said U.S. Secretary of Commerce Penny Pritzker. “The Tornillo – Guadalupe crossing serves as physical proof of what our governments can achieve when we execute a coordinated strategy that is developed in partnership with our private sectors.”

“The completion of the Tornillo-Guadalupe Port of Entry and International Bridge demonstrates our shared commitment to promoting the economic growth and prosperity of both of our countries,” said U.S. Secretary of Homeland Security Johnson. “Cross-border trade remains a critical part of our bilateral relationship and we will continue to collaborate with our Mexican counterparts to build the necessary infrastructure to facilitate lawful trade along our southwest border.”

The U.S.-Mexico border is already a zone of critical economic importance for both countries.  New crossing points between the United States and Mexico, like the Tornillo-Guadalupe Port of Entry, are essential for maintaining and enhancing North American economic competitiveness in a globalized world. Nearly $1.5 billion of goods cross between the United States and Mexico each day and approximately 80 percent of U.S.-Mexico goods trade crosses the border via road and rail. In addition, U.S. imports from Mexico contain as much as 40 percent U.S. content, which means that U.S. and Mexican-made goods often cross the border multiple times in the course of being turned into a final product.

To underline the importance of our border infrastructure as reinforcement for our trade relationship, the Tornillo-Guadalupe Port of Entry project was incorporated into binational discussions in our most important cooperation mechanisms – the High-Level Economic Dialogue and the 21st Century Border Management Initiative – through which our governments work together to strengthen trade, commerce, and security.

The Tornillo-Guadalupe project was supported by funding from the U.S. General Services Administration, CBP, El Paso County, as well as state and local dollars. The inauguration of this port of entry supports a dynamic and vibrant North American economy through stronger modern-day infrastructure.