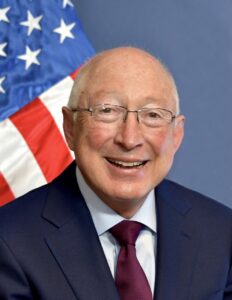 Ken Salazar was sworn in as United States Ambassador to Mexico on September 2, 2021.

In 2009, President Obama nominated Mr. Salazar to serve as Secretary of Interior where he had a lead role on the Obama-Biden agenda on energy and climate, the nation’s conservation agenda including America’s Great Outdoors, and Indian Country. Ambassador Salazar has been a lifelong fighter for civil rights and the inclusion of Latinos in the American dream.

Ambassador Salazar has been admitted to practice law in state and federal courts, including the United States Supreme Court.

Ambassador Salazar and his family have farmed along the banks of the Rio Grande River in New Mexico and Colorado for more than four centuries.