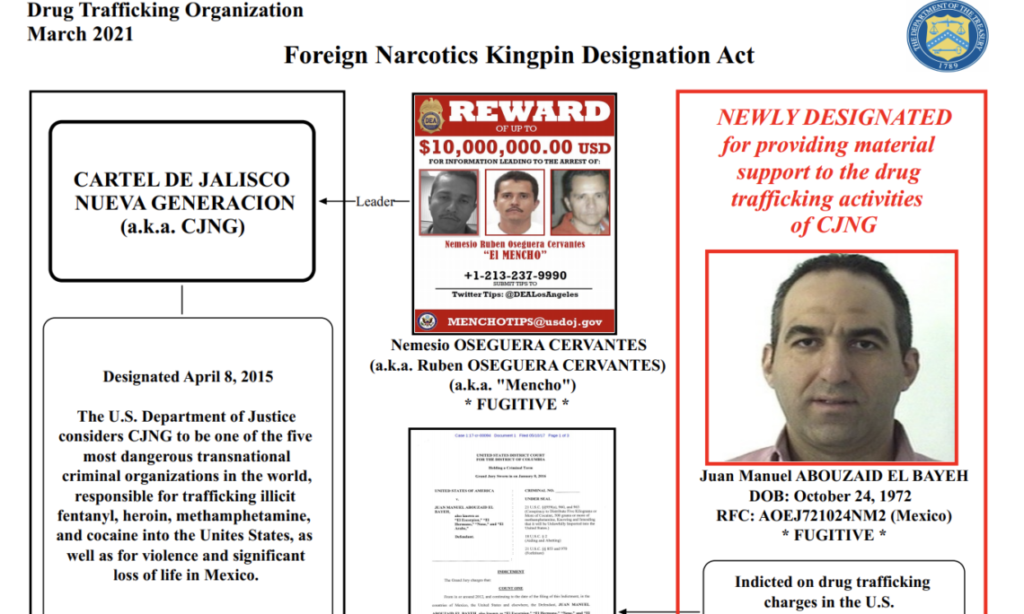 “Today’s action against Abouzaid El Bayeh is a demonstration of Treasury’s continuing commitment to dismantling CJNG through the targeting of critical cogs in the organization’s leadership structure,” said Secretary Janet L. Yellen.

Abouzaid El Bayeh was designated today for materially assisting in, or providing

financial or technological support for or to, or providing goods or services in support of, the international narcotics trafficking activities of CJNG. In June 2020, Mexican authorities blocked Abouzaid El Bayeh’s Mexican bank accounts due to his relationship with CJNG. In October 2018, the U.S. Department of Justice identified Abouzaid El Bayeh as being linked to CJNG and unsealed a federal drug trafficking indictment filed against him in the U.S. District Court for the District of Columbia that was investigated by the DEA Los Angeles Field Division. Specifically, Abouzaid El Bayeh was charged with conspiracy to distribute cocaine and methamphetamine, knowing and intending that it will be imported into the United States. The indictment alleges the activity began in or around 2012. Abouzaid El Bayeh, who remains a fugitive from these charges, maintains a close relationship with senior leaders of CJNG.

Today’s Kingpin Act designation marks OFAC’s twelfth action against CJNG, which was designated on April 8, 2015, along with its leader, Ruben Oseguera Cervantes (a.k.a. “Mencho”), for playing a significant role in international narcotics trafficking. In previous actions, OFAC designated a wide range of businesses and individuals linked to CJNG and its close ally, the previously designated Los Cuinis Drug Trafficking Organization. The previously designated businesses in Mexico include shopping centers, real estate companies, agricultural companies, a music promotion business, and a luxury boutique hotel. Many of these Mexican entities have engaged in the laundering of drug proceeds and represent attempts by CJNG and Los Cuinis to integrate themselves into the legitimate economy. Among the previously designated individuals are those who play critical roles in CJNG’s drug trafficking activities, including money laundering, and those who facilitate corruption activities on behalf of CJNG and Los Cuinis.

The U.S. Department of State’s Narcotics Rewards Program has issued a reward of up to $10 million for information leading to the arrest and/or conviction of Oseguera Cervantes. Tips can be submitted to DEA by phone (+1-213-237-9990), through Twitter (@DEALosAngeles), and by email (MENCHOTIPS@usdoj.gov).

As a result of today’s action, all property and interests in property of the designated individual that are in the United States or in the possession or control of U.S. persons must be blocked and reported to OFAC. OFAC’s regulations generally prohibit all transactions by U.S. persons or persons within (or transiting) the United States that involve any property or interests in property of designated or otherwise blocked persons.

Since June 2000, more than 2,200 entities and individuals have been sanctioned pursuant to the Kingpin Act for their role in international narcotics trafficking. Penalties for violations of the Kingpin Act range from civil penalties of up to $1,503,470 per violation to more severe criminal penalties. Criminal penalties for corporate officers may include up to 30 years in prison and fines of up to $5 million. Criminal fines for corporations may reach $10 million. Other individuals could face up to 10 years in prison and fines pursuant to Title 18 of the United States Code for criminal violations of the Kingpin Act.

For more information on the individual designated today, click here.

To view the Kingpin Act chart on the individual designated today, click here.