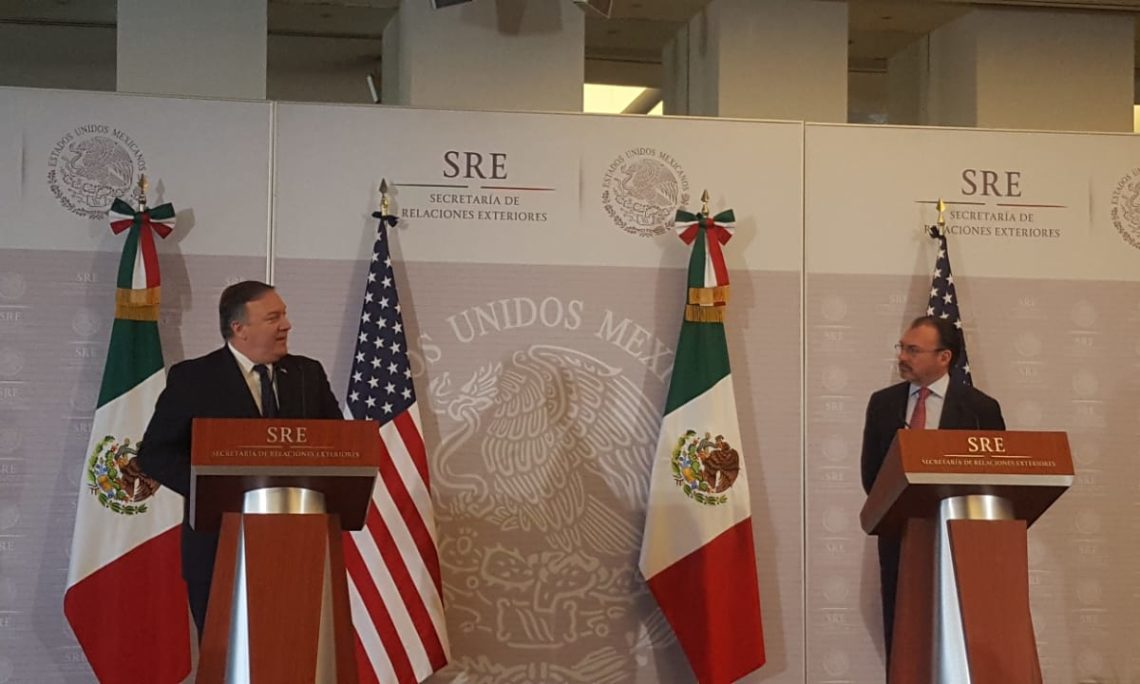 FOREIGN SECRETARY VIDEGARAY: (Via interpreter) Good morning to the representatives of the media. Welcome to the Ministry of Foreign Affairs.

It’s my privilege to welcome back to the – to our building and our city the Secretary of State of the United States Government, Mike Pompeo. Welcome back, Mike. It’s a pleasure to have you here, and you and your team. And now I will switch to Spanish.

(Via interpreter) For the Government of Mexico, it has always been a pleasure and an opportunity to welcome the Secretary of State of the United States at home. In – at least six times, Secretary Pompeo has visited our country in two occasions. And this is a notable change with respect to what was happening in the past, when we were used to the Secretary of State of the United States would visit the Middle East eight or ten times before coming to Mexico. This is a sample of the interest, importance that Secretary Pompeo has given to the relationship with Mexico, and this is something that we are very grateful for. It is – this is an opportunity to work together for the welfare of our people.

So thank you very much, Mr. Secretary, for your interest that you have shown in this – the relations between our countries as well as your leadership that you have taken on to build a better relation. The relationship between Mexico and the United States is large, it’s important, and it is also a complex relation. We have the most-traveled borders in the world. We have trade for a million dollars per minute. The border is crossed by more than a million people every day, and for Mexico and the United States this is the source of direct foreign investment and also a destination of our exports. In trade and investment and in migration and security, there is no other relationship that has the scope and transcendence that the relationship has with the United States.

With the government of President Trump, we have worked since day one with a logic of mutual respect to achieve understanding, and there are some differences that are yet important with the administration of President Trump, but something that is a merit of both administrations that we have – we haven’t allowed those differences to define our relations and we have been able to work together not only respectfully but also effectively. And I believe that there has been a significant achieved, which is the agreement in commercial – USMCA, which undoubtedly will provide not only stability and certainty to the economy of the United States and Mexico and Canada, but that will also be an opportunity for our region to be the most competitive in the world. And what this is about is that this example has yielded concrete results and that will be repeated in the rest of our relationship. We are dealing transcendental challenges. There are significant challenges and urgent things.

Part of our work meeting, we have talked about the caravan that – meaning that a group of Honduran citizens have tried to come to the – to Mexico with the purpose of reaching the United States. This is a challenge that Mexico is dealing with and I have expressed it so to Secretary Pompeo. We are a sovereign country. The migratory policy of Mexico is defined by Mexico, just as the migratory policy of the United States is defined by the United States. We are friend countries, we are partners, we are neighbors, and we are sovereign countries.

About this caravan, I would like to tell you that Secretary Pompeo’s commented that what is the essence of our position? It is the respect to human rights, the dignity of people, as well as the protection of this migrant group, particularly those that are most vulnerable, which are the children, the older citizens, and the women who are pregnant and are part of this caravan. Of course, in Mexico we have the rule of law, and we shall apply – enforce the law, but there will also be a humanitarian way that we will think about the migrant in the first place. That is why we have talked with Secretary Pompeo, that yesterday Mexico has invited the United Nations to the – at the office of the high commission, ACNUR, to involve – to get – to ask for the involvement in the process to help the migratory authorities of Mexico to rule on each of the individual requests that have been filed. Further on, we will work according to the Cartagena Protocol in order to find a permanent solution for the migrants.

We have been very close to the group that is – that are part of the caravan. The ambassador and the authorities, we have been in constant communication with the members of the caravan and explained them what are the options that they will find when they reach the border with Mexico. And we will encourage them so that their access to Mexico will be according to the – our laws and according to the procedures that we have set forth so that they can have a better life in view of the difficult circumstances they are experiencing in their country.

Something that we agree fully with the government of President Trump and Secretary Pompeo is the need to serve the root causes of the Central American migration, particularly to create development opportunities. We talked largely in our conversation that we had in Washington last week, where we had representatives of the three countries – Guatemala, El Salvador, and Honduras – and this will continue to be very important element of the international cooperation for development. For Mexico, it will be important to work with the United States so that we can create greater opportunities of development, employment, and welfare for the Central American populations, which indeed is the only option and solution to the problem that – of migration.

I am sure that the relationship between Mexico and the United States will go very well, and from the – with the transition from one administration to another. We welcome that President-elect Manuel Andres Lopez Obrador and President Trump have already had talks and they – and Secretary Pompeo would meet with President-elect Lopez Obrador as well as Marcelo Ebrard, who will be the foreign minister. I know that these talks will set the basis for a good understanding between Mexico and United States. This is advisable for United States and for the Mexicans, and we welcome the existence of this path of approach and friendship, always with a respect to the sovereignty of both countries, who understand that sovereignty and opportunities for joint wellness of prosperity and harmony. Thank you very much, Secretary Pompeo. It’s an honor to welcome you to this, which is ‘your house,’ as the Mexican’s say.

MODERATOR: Thank you, Secretary. Next, we will give the floor to the Secretary of State of the United States, Michael Pompeo.

SECRETARY POMPEO: First of all, thank you, Foreign Secretary Videgaray, for hosting me today. I appreciate it. I also want to thank President Pena Nieto and President-elect Lopez Obrador, and my incoming counterpart Foreign Secretary Ebrard for their shared commitment to tackling the challenges between our two countries.

I want to take just one moment to say thank you to you, Luis. Your dedication to vigorously defending the interests and rights of the Mexican people at every opportunity, every time I’ve met and encountered you, has been noble and proper, and you have done it with an enormous amount of professionalism. It’s probably the last time you and I will have a chance to be here together, and I wanted the Mexican people to know how well you have represented them. You’ve been vigorous. You have fought us hard, but always with the shared interest of making sure that our two countries ended up in a better place together, and I want to give my personal appreciation and thank you to you, Luis, for having done that.

SECRETARY OF STATE POMPEO: As you said, it’s true, we still have serious issues and challenges between us. We’re at a moment today, too, but I’m confident that our ability to tackle these issues together will lead us towards the right path. You don’t have to guess about that. We saw that with the trade agreement that our two countries put together. And I thank you and your entire government for the work that you put in to what was a vigorous debate, a hard-fought set of discussions, but got us to an outcome that I think will benefit each of our two countries for years and years and years to come. We’ll grow jobs. We’ll create wealth for the citizens of each of our two countries. And as President Trump has said, it is truly a good deal for all of us and for everyone, the Mexican people and the American people and the Canadian people as well.

Look, President Trump’s been clear about the largest issue that we face today after having negotiated that deal. We are quickly reaching a point which appears to be a moment of crisis, record numbers of migrants. Foreign Secretary Videgaray and I spoke about the importance of stopping this flow before it reaches the U.S. border. We are deeply aware that the way that Mexico will handle this, the way you will handle this is your sovereign decision. Mexico will make its decision. Its leaders and its people will decide the best way to achieve what I believe are our shared objectives, and I thank you for all the effort that you have put into this over the last few days, including your request for humanitarian assistance to the United Nations to address this migrant caravan.

I’ll speak with this with President Nieto as well, as well as with incoming Secretary Ebrard. The challenge related to securing our southern border is also a challenge for American sovereignty. We’ve got to fix U.S. laws in order to handle this properly as well. That is an American burden, a uniquely American burden, and as President Trump has said, it’s something that we need to address inside of our country to make sure that we do this well. If we get it right, we will improve the relationship between our two countries materially as well.

We also had a chance to talk a bit about how we can expand on the progress we’ve made at advancing security and prosperity throughout the Northern Triangle countries. We talked about this last week in Washington at the conference. We know that promoting economic growth and increasing security there is a critical component of solving the set of immigration issues we face. We have to all keep in context that this problem has enormous implications for the opioid epidemic in the United States, which President Trump has declared a national emergency. His fight against it has both a domestic and international component, and I have expressed and will express today America’s starting to deepen the cooperation with Mexico to address the production, distribution, markets in illicit revenue of transnational criminal organizations that traffic drugs into the United States.

I also want to thank you and President Pena Nieto for our continued collaboration with you to defend democracy and human rights in places like Venezuela and Nicaragua. We appreciate the leadership Mexico’s shown in this regard in the OAS and elsewhere.

Look, the bottom line in this: We have tremendous opportunity between our two countries. We have many challenges. But as we have just proven with our trade agreement, we can, with mutual respect for the sovereignty and rights of each of our two nations, tackle these problems, and I’m confident that we will resolve them together.