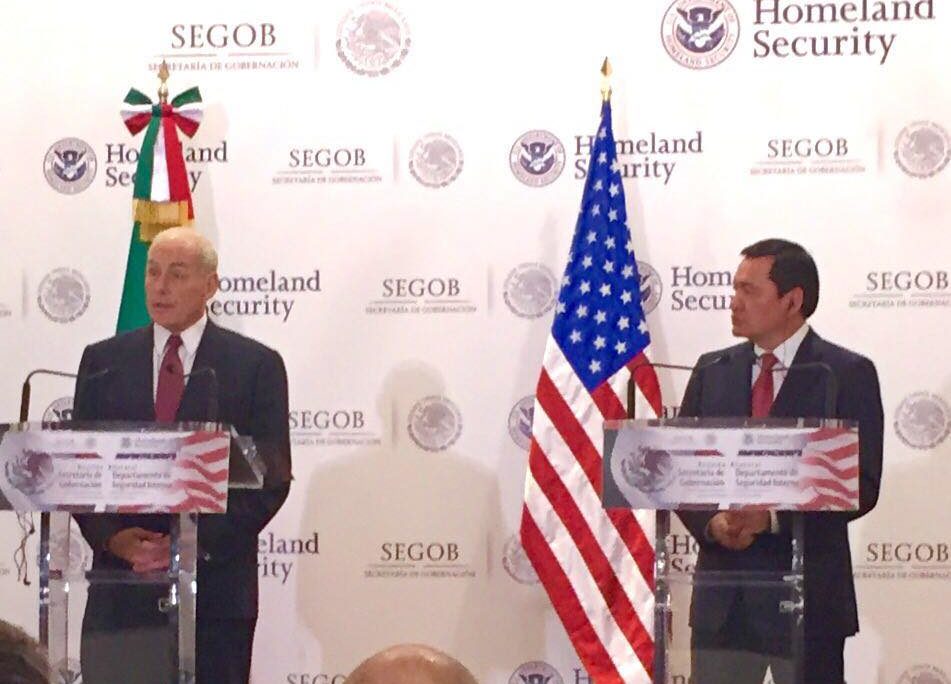 I want to thank Secretary Osorio Chong and his team for hosting me today. We had a good, substantive conversation about our shared security priorities.

I have had a wonderful three days in Mexico, meeting with many members of the Mexican government. I’d like to also thank President Peña Nieto, Secretaries Videgaray, Meade, and Osorio Chong, General Cienfugeos, Admiral Soberon, and Attorney General Cervantes for taking the time to meet with me.

I cannot stress enough how valuable the U.S.-Mexico relationship is to each of our nations, and I know Secretary Osorio Chong — and everyone I have met with over the past three days — agrees.

When I signed on as Secretary of Homeland Security, President Trump and I had a long conversation about our nation’s partnership with Mexico. The President has been very clear about his desire to work with Mexico on many of our shared issues.

You can see the Administration’s commitment to this partnership in Secretary of State Rex Tillerson’s significant interactions in Mexico, including one visit he shared with me a few months ago. Attorney General Jeff Sessions will also be meeting with his Mexican counterpart in a couple of weeks. These connections are an expression of the President’s intent to create stronger, durable bonds between our countries.

Mexico and the United States have a history of partnership, and it is natural for the two countries to work together to solve common problems in the region. We’ve had excellent operational cooperation in the security and law enforcement missions for years. Our intention now is to make those ties even stronger. We recognize that our prosperity and security are intertwined, and that criminal networks grow in influence and power when our two countries do not work together. As a practical matter, that means looking towards new agreements where we can share information, training, infrastructure, and planning resources. We will accomplish this with mutual trust and support.

Mexico has taken the regional lead in economic development of the Northern Triangle – having just cohosted the Conference on Prosperity and Security in Central American with the U.S. They have also been coordinating with us on increasing efficiency to speed legitimate trade and travel across the most productive border in the world.

We are also working together to defeat the scourge of illegal drugs, with special emphasis on the heroin, cocaine, and fentanyl that is flooding the hemisphere and resulting deaths in both our countries.

Yesterday, I had the opportunity to travel to the southwest part of the country, to meet with General Cienfuegos and Admiral Soberon. There I had the chance to talk with the soldiers and Marines working to eradicate mountainous poppy fields. As a former general, it was good to be out talking with the troops. Particularly these troops, who put their lives on the line to stop the production and transfer of drugs that otherwise would make their way into the U.S. bringing the accompanying violence and death.

The United States lost 60,000 people to drug overdoses just last year, and the toll in Mexico among citizens and law enforcement agents and officers has also been very high. I acknowledged to my counterparts that America’s insatiable appetite for drugs is the cause of much of the turmoil on their side of the border.   I pledged to continue to work with our government – and anyone else who can help in this fight – to address drug demand reduction in the U.S.

Once again, thank you Secretary Osorio Chong, for your hospitality today. I look forward to continuing our solid working relationship and meeting with you again soon.