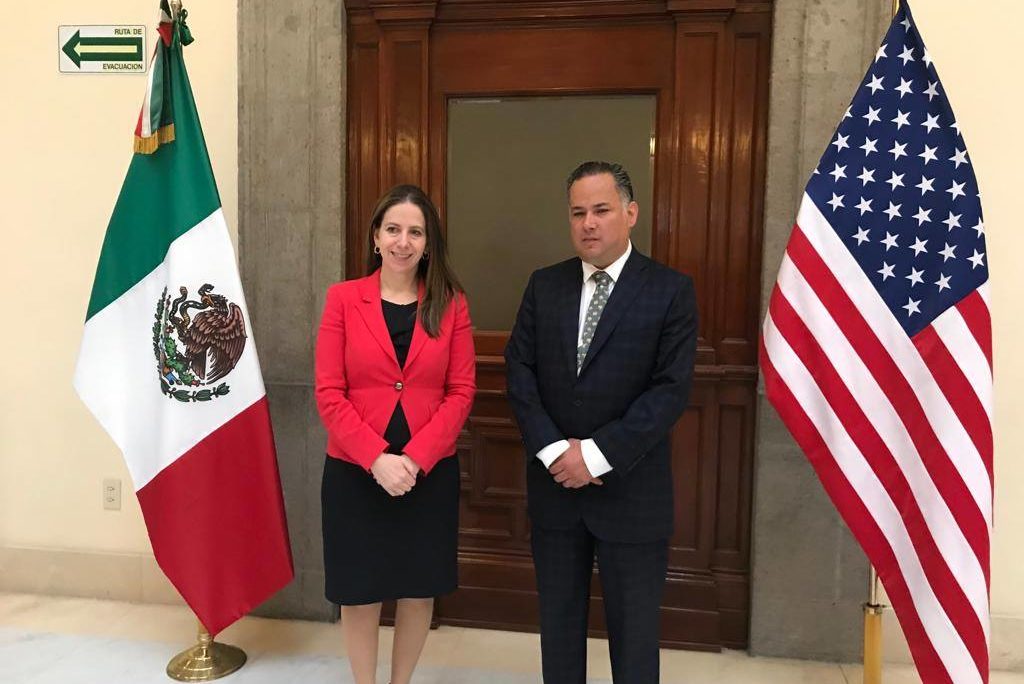 I want to begin by expressing my deep gratitude to the Mexican government, especially Secretary Urzua and Director Nieto for your vital cooperation with the U.S.  Department of the Treasury’s Office of Terrorism and Financial Intelligence (TFI) on matters that are of the utmost importance to both of our countries.  In today’s unprecedented joint announcement, I am pleased to open a new chapter of our bilateral efforts to identify and disrupt activities that threaten the integrity of our financial system and our democratic institutions.

Today, we are announcing sanctions by Treasury’s Office of Foreign Assets Control (OFAC) against two separate networks perpetrating corruption here in Mexico.  These actions, which we closely coordinated with the FGR, the UIF, and the Mexican Federal Police, sanction a Mexican magistrate judge and a former Mexican governor, as well as their networks, due to their involvement in corrupt activities.

Specifically, we are designating Mexican magistrate judge Isidro Avelar Gutierrez pursuant to the Foreign Narcotics Kingpin Designation act because of his actions on behalf of the CJNG and the Los Cuinis Drug Trafficking Organization.  These are closely allied narcotics trafficking organizations previously designated pursuant to the Kingpin Act in 2015, and they have been involved with drug trafficking into the United States.  Avelar Gutierrez has received bribes from these criminal organizations in exchange for providing favorable judicial rulings to their senior members.

Today, OFAC also designated Roberto Sandoval Castañeda, the former governor of the Mexican state of Nayarit pursuant to our Global Magnitsky Human Rights authority, which targets perpetrators of serious human rights abuses or corruption.  Sandoval Castaneda has participated in a wide array of corruption activities, including the misappropriation of state assets and the receipt of bribes from Mexican drug trafficking organizations, including CJNG.

As we know, CJNG is a powerful international drug trafficking organization that has caused significant pain and suffering on both sides of the border.  It is responsible for much of the increased violence in Mexico while sending many tons of drugs to the United States, including fentanyl-laced heroin.  The corruption of officials, such as Isidro Avelar Gutierrez and Roberto Sandoval Castañeda, is key to CJNG’s and other drug trafficking organizations’ deadly growth strategy and itfrequently allows its members to operate with impunity.

CJNG and its affiliates also engage in a variety of other criminal activities, including kidnapping, murder, extortion, and prostitution.  In fact, last year, we sanctioned a Venezuelan photographer named Miguel Leone, linked to CJNG, who recruited models and beauty pageant contestants into prostitution in Mexico and elsewhere.  Many of these young women were from Venezuela and were being exploited by transnational criminal organizations.  This situation is yet another example of how the crisis in Venezuela can have a ripple effect throughout the Western Hemisphere.

Since 2000, OFAC has designated multiple drug trafficking organizations under the Kingpin Act along with numerous individuals who have been responsible for horrific violence in Mexico.  The U.S.  Treasury Department will continue to use the Kingpin Act to complement ongoing Mexican government and U.S. law enforcement efforts to disrupt and to dismantle Mexican drug cartels, including by targeting corrupt officials who facilitate and enable their activities.

Also designated today under the Kingpin Act was senior CJNG member Gonzalo Mendoza Gaytan, known as “El Sapo,” who is responsible for kidnappings and numerous killings on behalf of CJNG.  His wife, Liliana Rosas Camba, was also designated for laundering CJNG drug proceeds.

In addition, six Mexican entities were also designated today pursuant to the Kingpin Act, all of which are located in the Guadalajara area of Jalisco, including architecture firms, real estate firms, a women’s clothing store, and a restaurant management company.

Today is Treasury’s first use of the Global Magnitsky authority in Mexico.  This powerful tool allows us to apply economic sanctions against perpetrators of serious human rights abuses and corruption.  To date, we have used this authority over 100 times worldwide.  Since the beginning of this Administration, in total, we have sanctioned 600-plus individuals and entities worldwide who are engaged in activities related to, or directly involving, human rights abuse and/or corruption.

Four Mexican entities were also designated today for being owned or controlled by Sandoval or a designated family member including a butcher business, a clothing store, and a real estate holding company.

Today’s coordinated sanctions with our Mexican government counterparts and U.S.  Government partners, advances our joint commitment to combating corruption in Mexico and beyond, using every tool at our disposal.  Corrupt officials, callously enrich themselves at the expense of their fellow citizens, and economic sanctions impose a serious cost to those individuals and limits their ability to enjoy their ill-gotten gains.  At OFAC we use a network-based approach to pressure different parts of foreign criminal organizations simultaneously in order to maximize disruption.  Our sanctions cut off these corrupt actors from the U.S. financial system, block their assets, disrupt their activities here in Mexico, and provide new leads for Mexican and U.S. law enforcement.

Whether corrupt officials receive bribes from a particular narcotics trafficking organization or engage in a variety of other illicit activities, we will continue to use our sanctions or other measures to disrupt and to change this behavior.  And, of course, we will continue to work closely with our Mexican government counterparts to achieve our shared cross-border security goals.

Again, I would like to thank the dedicated, career professionals at the U.S.  Treasury Department, our Mexican government partners, and other partners in the U.S.  Government, who work together on a daily basis to combat corruption and drug trafficking.  Lastly, I want to reiterate the U.S. Treasury Department’s commitment to working with the administration of Mexican President Andres Manuel Lopez Obrador in order to identify and address these threats, including illicit finance and corruption that our two countries face.