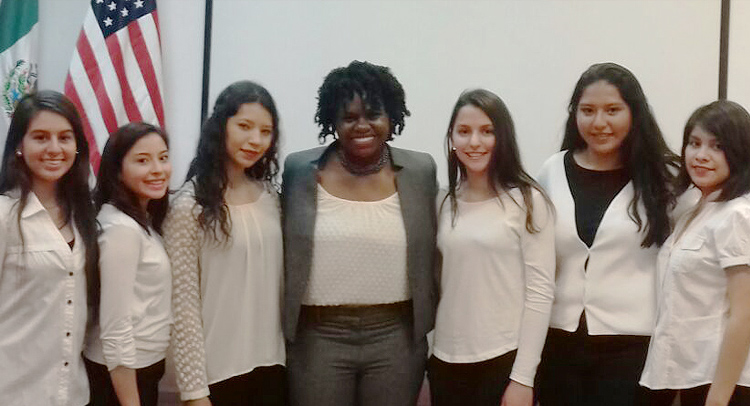 February 2016 — Vice-Consul Lekisha Gunn gave a presentation at the Prepa 15 in Monterrey on the role of African-American women in today’s American society and how black women use social media to celebrate achievements and highlight current social issues. Gunn talked about how millennial women use social media to share ideas and comment on social issues. The hashtag #BlackGirlMagic remains popular and allows black women to celebrate daily achievements and show their support for other prominent black women, such as the first lady Michelle Obama and other women in politics, government and entertainment. The event consisted of 80-100 students and lasted for 25 minutes, followed by a discussion of cultural appropriation, standards of female beauty, social networking strategies in Mexico, and a comparison with the United States.

Vice Consul Kelley Whitson gave a presentation to students of English Access Microscholarship Program” (http://exchanges.state.gov/non-us/EnglishAccess) about gospel music within the framework of Black History Month at Instituto de Relaciones Culturales (http://www.relacionesculturales.edu.mx). The diplomat spoke about how music was manifested during important periods of history. She focused mainly on gospel music and also addressed the issue of slavery, civil rights, and current social problems that the United States faces. The information presented complemented the lessons that students received previously about Black History month. At the end of the presentation, students answered questions about the material and then discussed their hopes and dreams for the future. The diplomat spoke to students before and after the program, giving them an opportunity to practice English.

In Durango, twenty-five students of the English Access Micro-scholarship Program (http://exchanges.state.gov/non-us/EnglishAccess) participated in a conversation about African-American History in the University of Juarez in Durango. Vice Consul Sarah Geisler spoke about famous African Americans and their contributions to modern society of the United States. After the presentation, students discussed the importance of diversity and tolerance based on the biographies of famous African American leaders who they had investigated. After the conversation, students participated in the opening ceremony of the English Access Micro-scholarship Program where they presented the research they had done to Consul General Timothy Zuniga-Brown.

As part of the Speaker Series this consulate offers, are you interested in one of our diplomats speaking to your organization? Please send us the topic and details of the presentation including preferred language (English or Spanish) to: ConsuladoUSAmty@state.gov

Remember that this consulate in Monterrey covers the states of Coahuila, Durango, Nuevo Leon, San Luis Potosi and Zacatecas.