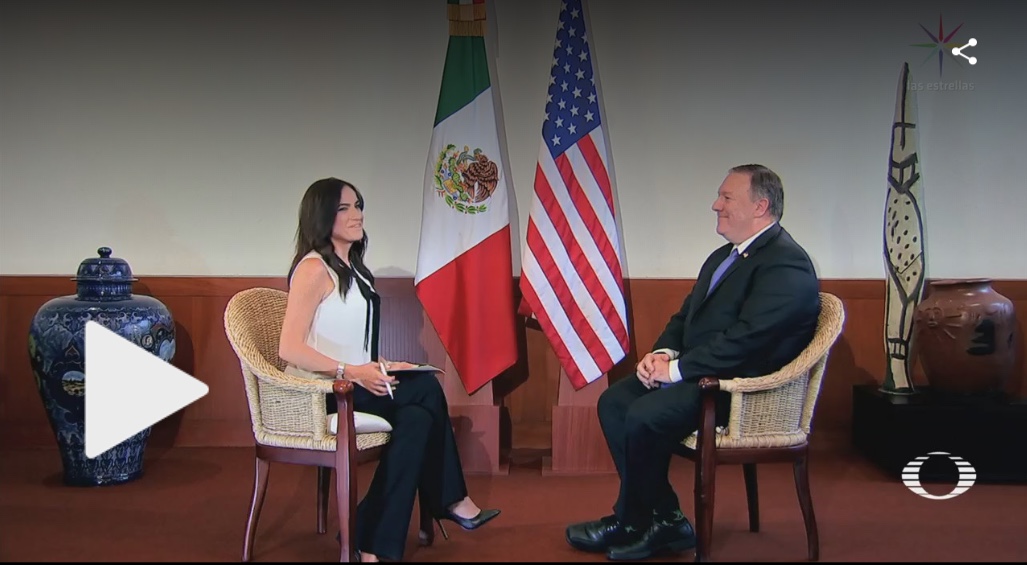 QUESTION: Mr. Secretary, thank you very much for your time.

SECRETARY POMPEO: It’s wonderful to be with you today.

SECRETARY POMPEO: A wonderful day, a very – a productive day, and I was so happy to be able to be here.

QUESTION: Did you have time to eat some Mexican food at least?

SECRETARY POMPEO: We did not. We missed that, but next time.

QUESTION: Okay. How did the reunions today went?

SECRETARY POMPEO: The meetings were excellent. We wanted to get down here shortly after the election. The Mexican people should be very proud. The election showed that democratic processes are here and alive and well. They ran an excellent election, and we wanted to get down here to see the current administration of President Pena Nieto to say thank you for all the good work they’ve done alongside us during their time in office. They still have four and a half months where we’re going to work closely together, but then we also wanted to see President-elect Obrador and congratulate him and share with him the great things that can happen between our two countries.

QUESTION: What are your priorities, United States priorities?

SECRETARY POMPEO: I think they are very similar to the priorities of Mexico. I think we have many overlapping interests. We certainly want to make sure that economic development and jobs are created on both sides of the border. Perhaps that’s priority one. We need to make sure that we have a trade arrangement that’s fair and reciprocal. And a lot of work has gone into that, and I am very hopeful that we can actually accomplish something in the days and weeks ahead on the trade front.

We want to make sure there iss security in both countries. I think that’s incredibly important, and there’s certainly an element of that will occur at the border in – between the United States and Mexico and in Mexico’s southern border as well. I think we can work closely. We have shared interest there. The lists of things that Mexico and the United States can do together is a long one, and we wanted to come down here and begin the conversations about those topics.

QUESTION: Irregular migration – such an issue between both countries, right?

SECRETARY POMPEO: Yes, it’s important to both countries to get that issue right.

QUESTION: So you went with the President-elect Andres Manuel Lopez Obrador. How did that meeting went?

SECRETARY POMPEO: Well, it was a wonderful meeting. I came with congratulations from President Trump. They had spoken by phone and had a wonderful conversation, and so we wanted to begin to develop relationships. We got a chance to meet with many of the senior officials that President-elect Obrador has designated to be our counterparts in the future, to develop those relations and begin to set out understandings about how we would work together to accomplish what can be great things between our two countries.

QUESTION: What about your meeting with President Pena Nieto?

SECRETARY POMPEO: It was wonderful. I’ve gotten to know him well over the years. He was gracious. He committed to working on the important matters. The world keeps moving, and so we all know that there can’t be four and a half months where no progress is made. And what I really believe is that the Pena Nieto administration has done good work. We’ve built a real platform where we can springboard the relationship as we begin to turn from this administration to the next one. We can really achieve great things. There will be difficulties. There will be challenges. Every bilateral relationship has them, but I am confident that if we work with good faith and good will, Mexico and the United States can do wonderful things together.

QUESTION: Five months until President-elect Andres Manuel Lopez Obrador takes office. These five months, how does – the relation will be between both countries?

SECRETARY POMPEO: The Pena Nieto administration is still in charge. They run the country through November 30th, so we will work with them. But what we saw was a fantastic relationship, actually, between the current administration and the incoming one as well, so I’m very confident that we will find ways to make sure that we’re achieving things that won’t only be accomplished in these next four and a half months but will be lasting benefits to each of our two countries.

QUESTION: What is the Trump administration doing to address the illegal drug problem issue between both countries?

SECRETARY POMPEO: That’s a really important question. We have enormous demand for drugs in the United States, but the President’s already done a great deal on the opioid front. He has created a task force which is working to diminish demand. There are security elements to this too; we can stop flows. But there are lots of things that the President has done. This is important. He issued an executive order early on in his time to reduce the demand for drugs on our side of the border.

SECRETARY POMPEO: Oh goodness, I’m not sure there was a single main topic. We covered the waterfront. It wasn’t a day for long, detailed negotiations, but rather to begin to develop a set of understandings about how our two countries have the chance to do great things together, and that the two presidents have great respect for each other, and leadership always can drive good outcomes, and so I’m counting on that continuing in the weeks ahead.

SECRETARY POMPEO: We have been neighbors for so long, we will be neighbors forever. We have to find ways to continue to make success possible for both sides. It’s not a zero-sum game between our two countries, and I’m confident that we can do that with this next administration in the same way we have with the current one. It’s – as I said before, it’s not the case that it’ll be perfect all the time. There will be places where we disagree. But I am confident that the value sets that our two nations hold are compatible and we can achieve things that benefit each of our two countries.

QUESTION: Are you concerned about NAFTA?

SECRETARY POMPEO: We have to get it right. President Trump’s made clear that was a priority. To make changes to NAFTA was a priority for him. But lots of progress has been made, and both in my meeting with President Pena Nieto as well as with President-elect Obrador, each of them made clear it was a priority for them to resolve the remaining outstanding issues, come to an agreement, and put that behind our two countries. If we do that, we’ll not only take an irritant out of the relationship, but we’ll have set the conditions for economic growth on both sides of the border.

QUESTION: Thank you very much for your time.

SECRETARY POMPEO: Thank you very much.

Video of interview on the Televisa Mexico website (not viewable in the U.S.)