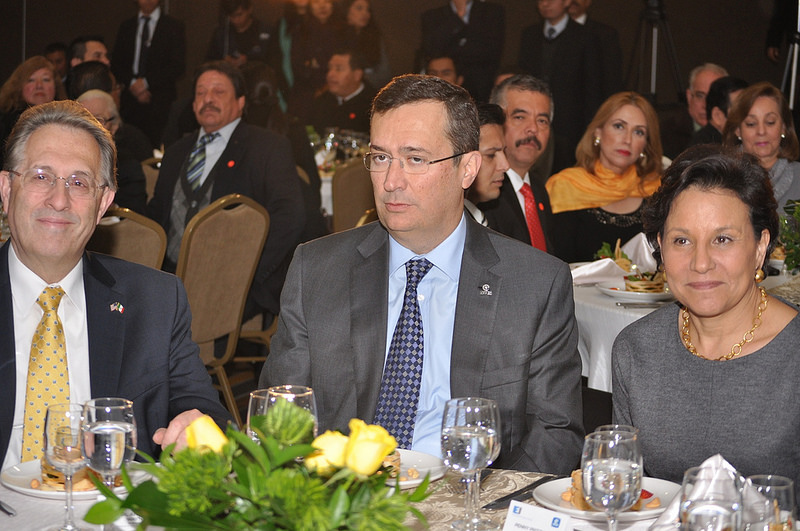 Ambassador Wayne and Secretary Pritzker during the luncheon hosted by CAINTRA

Today concluded U.S. Secretary of Commerce Penny Pritzker’s five-day business development mission to Mexico, which included stops in Mexico City and Monterrey.  This was Secretary Pritzker’s first international trade mission as head of the Department of Commerce and second visit to Mexico. Secretary Pritzker was joined by business representatives from 17 export-ready companies throughout the visit, who had the opportunity to engage with government and business leaders to make connections and learn about potential opportunities to expand their exports to Mexico’s growing key industries. The trade mission was specifically focused on promoting U.S exports and business opportunities in key industry sectors, including advanced manufacturing, information and communications technology, and health IT and medical devices.

On her final day in Monterrey, Secretary Pritzker participated in a ceremony to highlight the importance of corporate social responsibility.  At Lowe’s Cumbres, Secretary Pritzker joined the Mayor of Monterrey, Margarita Arellanes, the President of Lowe’s Mexico, Jose Louis Pier, and a representative of Cree, A.C., a foundation which Lowe’s has been supporting.  “When an American business invests in Mexico, or a Mexican business invests in the United States, they quickly become a key part of the community,” said Secretary Pritzker.  She called on those in attendance to “continue to weave the fabric that brings our businesses and our citizens closer together.  Because clearly, amazing things can happen when we do.”

Later, Secretary Pritzker and Mexican Secretary of Economy Ildefonso Guajardo Villarreal delivered keynote speeches before an audience of over 200 business and economic leaders from Monterrey. “U.S. businesses are here today, they will be here tomorrow and they want to be part of Nuevo Leon’s future.     The U.S.-Mexico friendship and trust is built on strong person-to-person connections, common values, and a dynamic commercial and economic relationship defined by openness, cooperation, and collaboration. The depth of our friendship has been evident to me and my delegation this week as Mexican companies and government officials have extended us such a warm welcome,” Secretary Pritzker said.

In her speech, the Secretary emphasized that the United States and Mexico must invest more in border infrastructure, do more to facilitate travel across the border, do more to jointly promote investment in both countries, do more to make our independent regulations more compatible, and focus on entrepreneurship and innovation. She also noted that plans are on track for finalizing the Trans Pacific Partnership (TPP).

The Secretary’s trade mission to Mexico underscored the significance of the bilateral relationship between the United States and Mexico and endorses the commitment of Presidents Enrique Peña Nieto and Barack Obama to make North America more competitive.