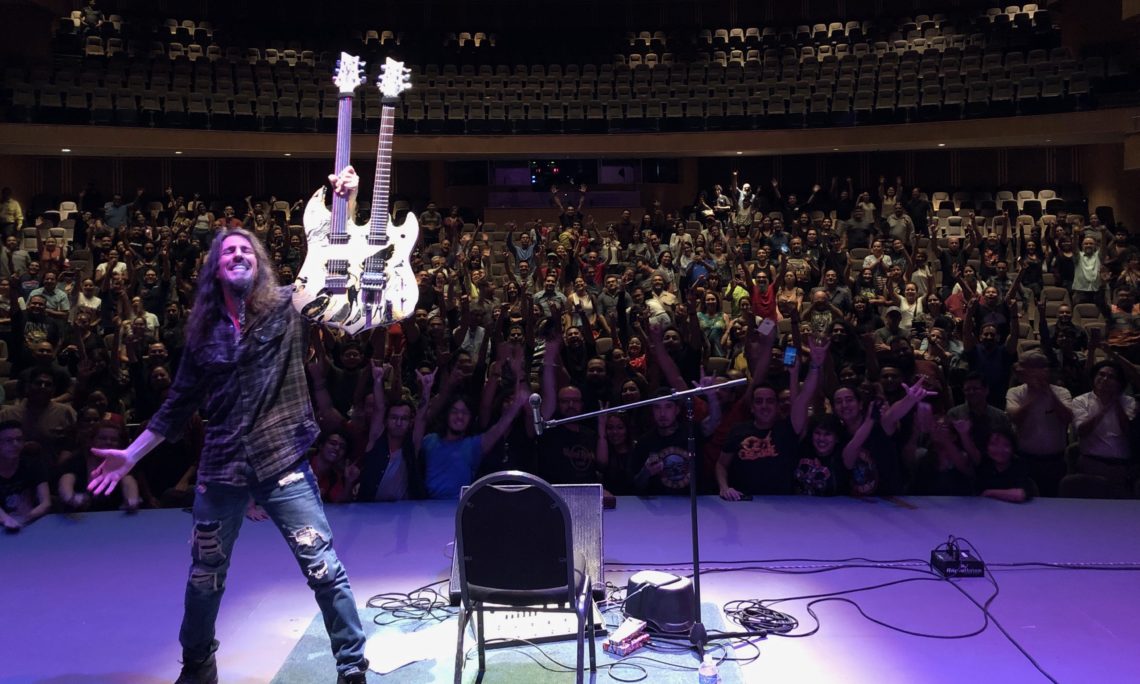 Globally renown guitarist and music composer Ron “Bumblefoot” Thal spent a week in Ciudad Juarez and Chihuahua.  His visit came with the support of the U.S. Consulate General in Ciudad Juarez.  The guitarist entertained a combined audience of nearly 2,500 people between concerts at the Paso del Norte Cultural Center in Cd. Juarez and on a stage outside Casa Chihuahua in the state capital.

With his signature double-neck guitar, Bumblefoot delighted attendees at the concerts with songs from his solo career like “Little Brother is Watching” and “Cintaku”, along with popular classic rock covers and songs representative of the groups in which Thal has participated including pro-rockers Asia, super groups Sons of Apollo and Art of Anarchy, and rock stars Guns N’ Roses, with which Thal was the lead guitarist from 2006-2014.

“The United States and Mexico have many areas of common cultural heritage, and obviously a huge number of shared interests that unite our countries and people.  But music truly is our common language.  Ron ‘Bumblefoot’ Thal is the best representation of that common language that the Consulate could bring to share with audiences here, and we’re so tremendously honored that he accepted our invitation and came to entertain our Mexican friends with so much good humor, grace, and talent,” said Brian Straight, Public Affairs Officer at the U.S. Consulate General in Ciudad Juarez.

In Ciudad Juárez, Ron “Bumblefoot” Thal also offered guitar clinics to students of the Esperanza Azteca Orchestra, as well as students of the music degree program at the Juarez Autonomous University (UACJ) and the Municipal Arts Center (CEMA).  In Chihuahua, Thal’s visit included master classes with students from the Chihuahua Autonomous University (UACH), students from the city’s music conservatory, and with the Chihuahua Youth Orchestra. In each of these engagements, Thal taught the enthusiastic young musicians his “secret techniques” to leverage their individual talents to draw the best sounds from their instruments.

“Young musicians often want to make a living playing music, but do not realize that the music business is about more than just playing their instruments,” advised Thal, who aside from his solo career as a guitarist also works diligently behind the scenes as a composer, producer, music teacher, and songwriter for other artists, television programs, and documentaries.  Thal has even expanded his musical entrepreneurial skills into other unique areas, like his award-winning line of hot sauces. “Be diverse and develop all your interests. It’s good for your soul, it’s good for your wallet, and you never know what opportunities will happen for you if you work hard and make a lot of friends in many different areas of your life and work,” Thal added.

As a cancer and major car accident survivor who underwent various lengthy medical treatments related to each, Thal also visited cancer and therapy/rehabilitation patients at the Children’s Specialty Hospital in Chihuahua.  He played some of his pieces for them and shared an inspiring message of resilience.

He encouraged the patients to put on a “good fight, and believe in yourselves.  It’s not about winning or losing, it’s about the fight, it’s about being humble enough to take whatever happens, but strong enough to fight for the best possible outcome as hard as you can.”

The U.S. Consulate General in Ciudad Juarez offers its sincere and profound gratitude to all the partners who helped make possible Thal’s engagements in Ciudad Juarez and Chihuahua, most notably the Chihuahua State Secretary of Culture, Casa Chihuahua, municipal governments of both cities, and the UACH and UACJ.