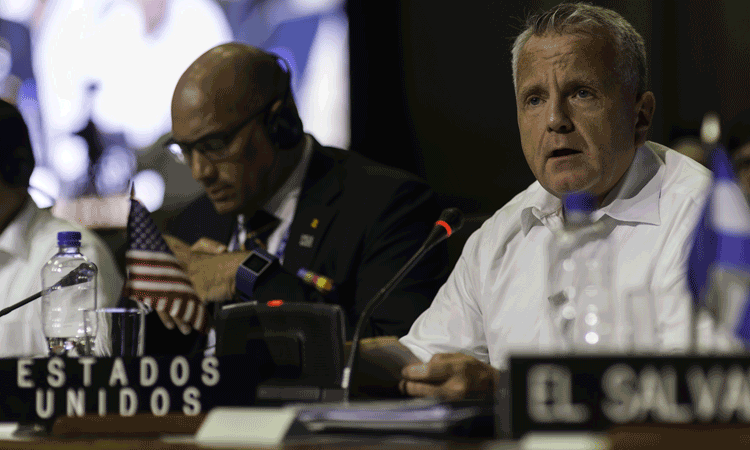 MODERATOR: (Via interpreter) Good afternoon. Welcome to this press conference of the Deputy Secretary of State John Sullivan. He will start with a brief declaration and then he will answer some questions. I will assign the persons that will be allowed to ask the questions. Please use your mikes.

DEPUTY SECRETARY SULLIVAN: Well, thank you very much, everyone, for being here. I’m delighted to see everyone. Good afternoon. Again, my – I’m John Sullivan, Deputy Secretary of State. I want to start by thanking President Pena Nieto and Foreign Secretary Videgaray and the people of Mexico for hosting this year’s OAS General Assembly. I also want to thank Secretary General Almagro for his bold leadership of the OAS and thank him and his team for organizing this general assembly.

The Trump administration recognizes the enormous importance of our neighbors in the Americas in building long-term prosperity for the United States. Our partnerships in the Western Hemisphere are vital to our economic competitiveness and essential to our ability to solve transnational challenges and ensure stability in the region. The Trump administration is committed to working with our partners in the Americas to defeat transnational criminal organizations, keep our countries free of drugs, and end the violence, illegal arms sales, and human trafficking that are lethal byproducts of the drug trade. We know in the United States we have our own work to do in reducing demand, but we call for countries in the Western Hemisphere to quickly put new pressure on drug cartels and undertake new commitments to defeating them.

Lasting prosperity and collective security also require effective democratic institutions that deliver results for their people, provide economic and social opportunity, and safeguard citizens’ security. OAS member-nations are fostering increasingly greater agreement, helping Venezuela find a peaceful, democratic, and comprehensive solution to its current problems and holding their government to account for its abuses. We all have been alarmed by the dramatic deterioration of democratic rule in Venezuela and by the violence and breakdown of civil norms that have accompanied it. On behalf of the United States, we say to the Venezuelan people that your cause is not forgotten. We stand with you in your aspirations of recovering a society that guarantees civil rights and political expression.

The Government of Venezuela must understand that attempts to silence its citizens’ voices will not stop others around the world from speaking up for them. The United States joins its partners in the OAS in urging the Venezuelan Government to fulfill its commitments under the OAS Charter. These commitments include holding free elections, respecting the independence of the national assembly, releasing all of Venezuela’s political prisoners, and directly addressing the humanitarian needs of the Venezuelan people. In keeping with the spirit of the Inter-American Democratic Charter, our goal remains a return to the full respect for the rule of law and the full respect for freedoms of political expression and participations in Venezuela.

We encourage all OAS nations that are committed to upholding these values in their own countries to join the United States in holding the Government of Venezuela accountable. The level of agreement between OAS partners to confront the situation in Venezuela is a win for democratic values, and we hope to maintain this level of unity as we work to solve shared security challenges and obtain prosperity for all of our citizens.

Thank you. I’d be happy to take questions.

MODERATOR: (Via interpreter) Thank you. The first question will be for Tracy Wilkinson, the LA Times.

QUESTION: Hi, thank you very much. You spoke today passionately, I would say, about the need for this organization to be relevant, but you all were not able to agree – you all were not able to agree on a resolution for Venezuela. How do you explain that failure? And do you think that the recent reversal by the United States vis-a-vis Cuba has weakened your hand in a forum like this?

DEPUTY SECRETARY SULLIVAN: Well, I don’t think – I wouldn’t describe – this is an ongoing process. There was a meeting yesterday and a vote yesterday in which the largest number of member-states – 20 – voted for the resolution under – that’s been presented, I might add, under the effective and passionate leadership of Foreign Minister Videgaray. So 20 nations voting for it is the largest number that have expressed support for such a matter, and that resolution is still under consideration in the general assembly. Under the leadership of the Mexican Government, our hosts, we are hopeful that that resolution will be presented again for a vote and passed.

As I described in my remarks at the plenary a little while ago, in my opinion, this resolution is a very modest step to address what can only be described as a humanitarian crisis in Venezuela – people being – losing their lives, repression of human and civil rights, and an economic collapse. It’s really a dire situation. What the resolution does is propose that a group of so-called friends, of nations that would be – a balanced group of nations that would be interested in helping to effect a resolution of the crisis in Venezuela on behalf of the Venezuelan people.

The resolution – I characterize it as a modest step only because the resolution merely authorizes the creation of such a group without dictating who the members would be or any future steps that would be required. So it’s a modest step and one – but one that we think is necessary to address this crisis.

With respect to the U.S. change in – that the President announced in its – in our policy with respect to Cuba, I’m not sure that that had any effect on votes. It hasn’t been mentioned to me. I’ve had almost 10 – nine or 10 bilateral meetings today to discuss this resolution, and that was not raised by any country. I – so the thoughts I would leave you with are this is an ongoing process. We’ve got 20 votes. We’re hopeful to get more. But the process is continuing under the able leadership of our hosts, the Mexican Government. Thank you.

MODERATOR: (Via interpreter) Thank you. The second question will be for Televisa.

QUESTION: (Via interpreter) Yes, thank you very much. Could you tell us what is the status of this group? Is that part of the proposals that were denied a future yesterday? Or what will be your role in this group? Which will be the members and what will be the goals of this, and if this is going to be worked again in the future? And – excuse me, and what is the U.S. position? What is it that you are mostly interested in? I know that all the countries like Venezuela and Mexico have been very clear on what it is that they are interested on after the constitutional assembly in Venezuela. But for the U.S., what is the most important thing vis-a-vis the crisis in Venezuela?

DEPUTY SECRETARY SULLIVAN: Thank you. Well, as I said, the resolution is really a modest step. It doesn’t, in and of itself, create or constitute the group. It merely authorizes its creation and it is not a step that the United States is taking; it’s a step that the OAS is taking in our collective response to this crisis in Venezuela.

So as I said, it is a modest step. The members of that group are to be determined in future consultations among OAS members. It may include outside parties such as the Vatican or the UN. That is all to be determined. The step that’s being – that was discussed yesterday and we hope will be approved and voted on here is merely authorizing the creation of such a group without defining its members in advance or its charter.

Our ultimate goal is the restoration of the rule of law and political expression, civil rights for the people of Venezuela. That’s the United States – that’s the United States goal in its urging the – our fellow members of the OAS to vote for this resolution as a step that we as an organization can take to facilitate a resolution of this crisis in Venezuela. It’s a modest step, but one that we think is necessary.

MODERATOR: (Via interpreter) Thank you so much. The third question will be for EFE.

QUESTION: Hi, I’d like to know that even if the resolution passed, Venezuela has already rejected any group coming from OAS, so how can it be useful?

DEPUTY SECRETARY SULLIVAN: Well, it’s first of all a reaffirmation of the OAS charter and our democratic values that we all share. We hope to include other – potentially other parties could be included. The Government of Venezuela has in the past participated in a dialogue with outside groups.

It’s not lived up to the commitments that it’s made, so its statement now that it won’t abide by any resolution that’s adopted by the OAS is not surprising, but it doesn’t relieve us as members of the OAS, both individually and collectively, for taking all the actions that we can to provide a means for de-escalating the violence, the chaos in Venezuela, and providing a means for facilitating a resolution by the parties, by the Venezuelans themselves. It’s ultimately the Venezuelan people who will need to decide this issue because that’s our commitment to democratic values.

This is not an intervention by the OAS or by the United States. It’s merely an offer by countries in the region; a responsible organization, the OAS, with a charter dedicated to, among other things, promotion of human and individual rights, putting together a group of – a balanced group of countries to help facilitate a resolution of what is a serious problem in a neighboring country. And I think that’s the minimum that the OAS can do to help address this situation.

MODERATOR: (Via interpreter) Thank you very much.