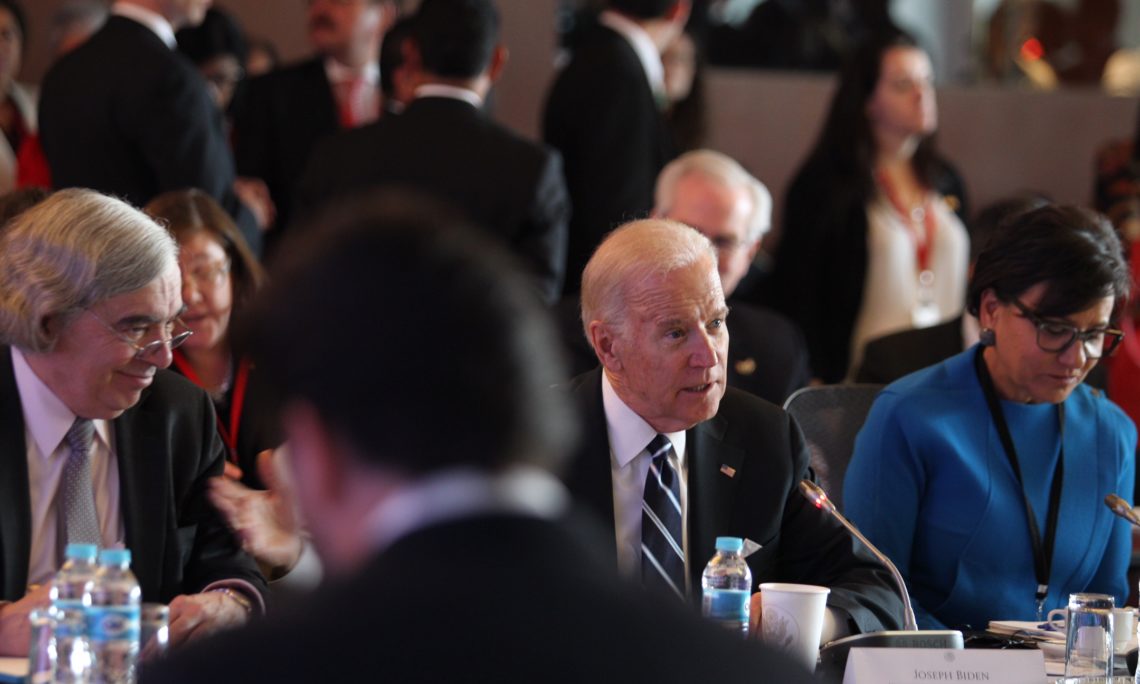 THE VICE PRESIDENT: (In progress) meeting with the CEOs, the so-called stakeholders meeting. And I’m going to repeat very briefly a little bit of what I said there because I want the Mexico and American press to quite frankly — to hear it, and to disabuse some folks of some of the things they’re hearing on the “other side of the border.”

Number one, I’ve been coming here, Mr. Secretary, since I was a 30-year-old, United States senator in 1973. And everything has changed — the tone, the attitude, the desire for cooperation, the willingness to acknowledge the other person’s point of view. It has been a really genuine growth into what I think — and I know because I travel the world for the President — the rest of the world looks at it and thinks is a true partnership.

In other parts of the world, this relationship is looked at with some envy. And it’s a partnership that has matured. And mainly I think because increasingly — but I hope in our administration — we’ve made it clear this relationship with Mexico and our administration is not about, as it was 30, 40, 50 years ago somewhat condescendingly, what we could do for Mexico. This is about what we can do with Mexico. I mean that sincerely. We need you as much as I hope you think you need us.

In recent years, the growth of our economic progress has been somewhat staggering. And this is the first time in my career, but quite frankly, the first time in the history of either of our countries when you can look at this hemisphere from Northern Canada to the tip of Argentina and picture it being without our reach that the entire hemisphere is middle class, is democratic, and is secure. We’re not there yet.

But it is within reach. But two of the four, in my view, most critical players in making sure that happens are the United States and Mexico. What we do with one another also has the potential to have enormous benefit from the Caribbean to Argentina. And I hope we understand the potential that exists. I think — I know the leadership does.

And I want to say one other thing because I feel obliged and — I feel obliged. I spend a lot of time in the hemisphere. And quite frankly, I have been — I’ve observed meeting with — I just met with three Latin American Presidents for four hours yesterday. I’ve spent time with President Santos recently and others throughout the hemisphere. The message that is coming out of the United States as a consequence of a presidential campaign about American attitudes toward Mexicans and Mexico, generally, but the entire hemisphere and our place in the world is disturbing. Some of the rhetoric coming from some of the presidential candidates on the other team are I think dangerous, damaging, and incredibly ill-advised.

But here’s what I’m here to tell you: They do not — they do not represent the view of the vast majority of the American people. It’s really critically important. You’re all sophisticated women and men. I hope you know that. But I hope you’ll make it clear what also the rest of the polling data in America shows, we are a nation of immigrants.

We are as strong and as consequential as we are because we are a multicultural nation. We have had the benefit from long before my Irish ancestors because of a famine and persecution in Ireland in the 1850s and ‘40s left; from the early 1700s, to today, the story of America has been a constant unrelenting flow of immigration.

Some of you know — I know the Secretary knows — he recently passed away, a brilliant fellow, referred to sometime as the Henry Kissinger of the East, Lee Kuan Yew. Lee Kuan Yew and I were meeting — he asked me to meet with him two years ago. He was frail, but he was as my mother used to say, sharp as a tack. He was complete control of this faculties.

And he wanted to meet with me because I had spent so much time with President Xi of China when he was Vice President. He wanted to talk about China. He wrote extensively on the future of India, Russia, China, and the United States. And we sat in his home — I believe it was his home. It was an annex. And he was a brilliant fellow. And about seven to 10 minutes into an hour-and-a-half conversation, I looked at him and I said — because we were talking about how rapidly President Xi had consolidated power in China. And I looked at him, I said, what are the Chinese doing now, Mr. President? He had been President of Singapore. And I meant, what’s the thought process going on?

And I said, I can tell you what’s in that black box. I’m old enough now to hazard a guess. The first thing in that black box — this is an actual conversation — is stamped into the DNA of every naturalized, as well as native-born American is an overwhelming skepticism for orthodoxy and authority. The only way you make fundamentally new things is break old things. That’s the innovative genius that continues to repeat itself in my country.

The second thing I said, Mr. President, is an unrelenting flow of new immigrants into America. Non-stop since before the founding of our country. And the reason is we get to pick — we don’t get to pick — we are chosen by the strongest, most innovative, most courageous, most optimistic people of every culture. Because think of what it takes to come to Mexico, which migrants are doing now from Central America, or to the United States. You got to sit there, look at your family and say, I got a great idea. Let’s sell everything we have, give it to somebody to figure out how in the devil we can get to a country that doesn’t apparently want us, where I don’t speak the language, where I have no job, and I’m not sure we do, but let’s go. I really mean it. I really mean it.

And if you notice, the United States Congress voted initially for a significant immigration reform bill. We will get there. This too shall pass. We’ve gone through these episodes of xenophobia, but it always is overcome. So the main message I wanted to say to you is that I understand that you can’t poison the well and at the same time work out a real-estate agreement to buy the well. We’re talking about how we improve our relationships commercially. And you’ve made great progress — improved infrastructure at the border. Last year started key projects to open the first railroad crossing between Mexico and the United States since 1910. The pedestrian skywalk linking Tijuana Airport with a San Diego passenger facility, our children are going to say, what the hell took them so long? Why did that not happen before? The newt international bridge to facilitate trade between Juarez and El Paso. And we’re deepening our cooperation on education. We’re deepening our cooperation on exchanging students, and institutional exchanges, et cetera. We’re spurring greater economic development through innovations like the Interactive Border Industry Cluster Map, which is a fancy way of saying businesses on both sides of the border are going to figure out where the good place to invest is, and how you get closer to get product, et cetera, how you grow your businesses.

Over the last two decades, we’ve built a trade juggernaut — $1.5 billion in business together every single, solitary day. And both our nations are members of the TPP. And we’re working together now to set new global standards on the environment, on labor. When it comes to energy cooperation, we’re working more closely together than ever before. You’ve made some courageous changes, your President has, in your constitution. You are bringing it into a completely different century.

North America is going to remain the epicenter of energy. For the foreseeable future, giving us much greater flexibility than we ever would have had. And together we can explore clean and renewable sources. In 2013, we built $630 million worth of new wind and solar energy projects along the U.S.-Mexican border.

When I’m told, well, why aren’t they doing something in oil producing states, I say, look, we got all the energy we need right now in terms of fossil — what are we doing together? We’re going to meet the implementation requirements for the Paris accord. It’s going to affect the health and wellbeing of our children and our great, grandchildren.

And I’m proud that we’re looking to ways to include climate change in the dialogue. And when we met last year, and I’ll conclude with this, we met last year — when I opened the dialogue from my side two meetings ago, but last year we met and we all were optimistic about being able to make progress. And I guess because I learned this from Penny, I posed a question: What do we want the U.S.-Mexican economic relationship to look like in the next five to 20 years? You all answered that in your own way.

If you excuse me for quoting an Irishman with my Mexican guests and my American guests, William Butler Yeats wrote a poem about his Ireland called, Easter Sunday 1916. And there was a line in the poem that best describes where we sit today, Mr. Secretary, than I think his Ireland. He said, all’s changed, changed utterly. A terrible beauty has been born.

It’s up to us to determine whether or not it’s terrible or beautiful. But the potential is awesome. And there’s no more critical partner we have in the world than you. So I hope we — as soon as I stop talking, we can get down to brass tacks, as they say and work through some of the outstanding difficult issues we still have to tackle, both in TPP, as well as in this dialogue. And we have to be honest with one another about it, and figure a way through.

But I thank you all. I thank you for your courtesy. Mr. Chairman, Madam Foreign Minister, and all your distinguished guests. And we’re anxious to get to work. Thank you. END