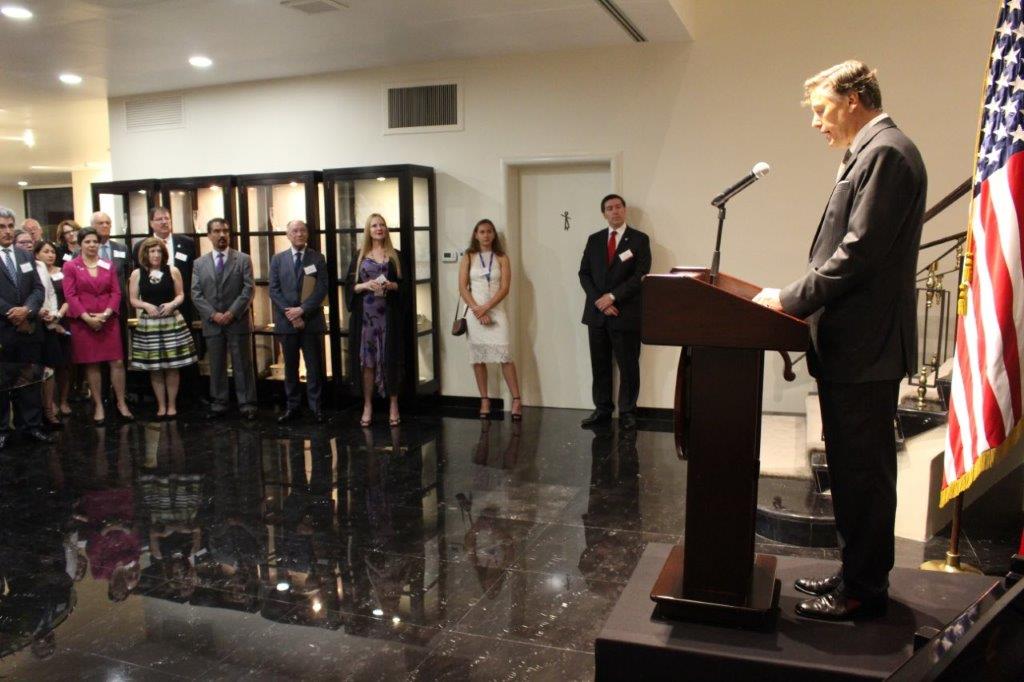 Fulbright-Garcia Robles grantees, welcome to Mexico. I am pleased to welcome you at the start of your time in Mexico and congratulate you on being selected for this program.

As you may know, I am also a newcomer in Mexico City. I arrived only 10 days ago, so we’re all just getting our bearings.

While I bear the title and official responsibilities, in a large sense you are all U.S. ambassadors as much as I am. Senator J. William Fulbright, the man with the vision to create the Fulbright program, saw the world from a different perspective.

He wanted to humanize international relations by changing how we see one another. In this context, Senator Fulbright once stated: “The essence of intercultural education is the acquisition of empathy – the ability to see the world as others see it, and to allow for the possibility that others may see something we have failed to see, or see it more accurately.”

Keep in mind Senator Fulbright was focused on preventing nuclear war in the early days of the Cold War, which might make the challenges we face today seem less daunting. As participants in our flagship exchange program, you are representatives of our country, just like your Mexican counterparts in the United States. Beyond the scope of your official program, you and your hosts will learn from one another.

You will create synergies and exchange ideas so that together you can change how people of both countries perceive one another.

Some of you will be in cosmopolitan environments where you may blend in. Others of you may be the only U.S. citizens the people around you have ever met.

It should be a fascinating and rewarding experience. In a way, I spent my childhood as an exchange student. I was born in Spain when my father served in the embassy there, and thus began my education in the value of experiencing and learning about other cultures. My worldview developed by growing up in other countries, particularly in Latin America.

My father became Ambassador to Paraguay when I was eight years old, and he later served as Ambassador in Chile and Venezuela. I was always curious to take in as much as I could in my host countries, because I understood that having cross-cultural skills would make me more adaptable, more independent, and in the end, more open to other ways of looking at the world.

Being a Fulbright-Garcia Robles grantee has the ability to do that for you. Through the decades, this program’s thousands of alumni have helped strengthen ties between the United States and over 150 countries. Here in Mexico, since the 1960s, the program has forged personal relationships that have helped transform bilateral relations.

The United States and Mexico are committed to increasing academic collaboration between our countries. Our joint funding of the Fulbright-Garcia Robles grants over the past thirty years proves that.

Since 2014, we have worked to expand this cooperation through mechanisms like the U.S. Mexico Bilateral Forum on Higher Education, Innovation, and Research (better known as FOBESII), which will hold a colloquium at the Ministry of Foreign Relations on October 7.

FOBESII embraced the spirit of programs like the 100,000 Strong in the Americas Innovation Fund Grants, which aid cooperation between U.S. and Latin American universities to increase exchanges for students and researchers.

Teams that include Mexican universities have won nearly a third of these grants. FOBESII also created opportunities for thousands of Mexicans to attend short-term academic programs in the United States with generous funding from the Mexican government and higher education institutions on both sides of the border.

Our bilateral cooperation also includes opportunities for younger students. Together with the Government of Mexico, and with the help of COMEXUS and private sector donors, we implement programs like Jóvenes en Acción, which promotes civil engagement for high school students.

Both the U.S. and Mexican governments recognize the importance education and academic mobility has for students, professors, and researchers, and for both nations more broadly. We are proud of our Fulbright-Garcia Robles Alumni who have gone on to take senior positions in the public and private sectors as well as academia. Distinguished Fulbright alumni include the current Mexican ambassador to the United States and my own deputy, John Creamer. COMEXUS Executive Director Hazel Blackmore and some of her team are also Fulbright alumni.

Many of you may follow the steps of prominent Fulbrighters and make your mark in ways that improve the lives of people in both our countries and beyond. I hope you find your time in Mexico not just rewarding, but life changing – I know that I will.

By working together and promoting mutual understanding, I am sure we can attain a more prosperous, secure, and democratic Western Hemisphere. You will be conducting important research, studying, working in Mexican businesses, and helping teach English in states throughout Mexico.

Your placements include several institutions where we have not had Fulbrighters before, making you pioneers of our diplomacy. Remember that empathy, just as Senator Fulbright said, is an incredible skill to have. With it you will be able to relate and connect with others. You will inspire and empower their minds to achieve something great.  Thank you very much.