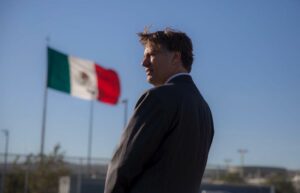 Thank you so much, I hope it is just a coincidence that I come up and the honor guard goes out at the same time.  But it is a real pleasure for me to be here today and I am delighted that we have so many distinguished guests with us.  Congressman, Mayors, Consuls General, Commissioner, Administrators.

I think the Congressman put it well that a project of this magnitude just doesn’t happen overnight.  This particular project took ten years in the making and one of the things that I’ve learned in my four months in government so far since I’ve been Ambassador to Mexico, has been how hard it is to get the bureaucracy to coalesce around a project, so I am sure that there’s many of you in this audience who are responsible for making today happen.

And I wanted to acknowledge your efforts, your dogged determination, and you will have to be content in your own self-knowledge that you helped moved this ball forward because there is a lot of people that  have done that but it always takes a few key people and, so for me as the U.S. Ambassador to Mexico it is just such an honor to be invited to this.

I think this kind of project symbolizes the way that we can improve our frontier, which is obviously a metaphor for the relations between our countries.

And the border is a very special place, it’s the line that divides our countries, but it is also a region that really unites our countries and I think each and every one in the audience here today, understands the economic, the family ties that unite these two countries, and I am just so proud to be here at the unveiling of this facility.

When I became Ambassador to Mexico, I announced that I have three priorities:  migration, security, and commerce.  And I think standing here today I feel like I am really at the epicenter, ground zero for all of those priorities and this is where all happens.

And I want to give a special shout out to the men and women of the CBP.  You guys are the ones who really enforce our border laws and I am grateful to you for that.  You really are the front line of defense for our country and I just want to tell you how much I appreciate your service and I honor and respect what you do.  And let’s give a big applause to our CBP.

When I was in college, back in the ‘80s, the leading book on U.S.-Mexico relations was called “Distant Neighbors.”  Now, the leading book is called “Vanishing Frontiers,” and I think this demonstrates probably more than anything the incredible strides that our two nations have made over the past few decades.

NAFTA was obviously a huge step forward in bringing our countries closer together and really increasing the security and the prosperity of both and I am very confident that we will now see a USMCA or T-MEC Agreement.

Congressman, I hope you can deliver on that, ok.  Thumbs up for tomorrow. Ok, I love that.  Let’s give a round of applause for the new agreement.  That is a huge thing, Congressman, thank you for your efforts on that.

Again, that takes a lot of leadership, trade deals are generally not politically popular but I think so much work was done by so many people to make sure that this one was and I think so many congressmen and women were made to understand the value that this cross-border trade brings to both countries.

In fact, Mexico is now, not only just our neighbor, but also our largest trading partner in the world.   And nowhere is that more evident than here in the Calibaja region.  You are an example of a dynamic and interconnected community that works and advocates together, to achieve prosperity for both countries.

You all are the true ambassadors of Mexico and the United States.  When a Mexican coming into the United States or an American sees a face at the border, that is really, I think, in a much more real way an ambassador than I am in remote Mexico City.  So, you’ve become the best promoters of an innovative and developing region.

It is wonderful that we are today formally concluding this ten-year, 741-million-dollar modernization and expansion project at this port of entry, the busiest in the Western Hemisphere.

These hundred thousand crossings a day are more than a statistic.  They represent the personal stories of Mexicans and Americans tied to both countries through business, culture, and family.  They share hopes, dreams, and hard work to build a better future.

I recognized CBP but I also would like to recognize the incredible efforts of those at the GSA who worked with CBP on this project.  This project is going to improve regional interconnectivity, facilitate legitimate travel, boost trade and investment, and benefit both countries.

One representative of this commitment and dedication, and of the agencies involved, is Southern Border Projects Director for GSA Ramón Riesgo, who has overseen the expansion and modernization project here in San Diego.  Ramon has been an excellent partner and liaison for the border community, keeping stakeholders updated on infrastructure developments.  Where’s Ramon?  Congratulations and thank you!

Investing in Calibaja means investing in both countries.  As many of you know, total exports from this region reach 24.3 billion dollars a year – 6.2 billion dollars of which, stay within the binational megaregion.  More than fifty percent of registered maquiladoras in Baja California are U.S.-based companies, and about 566,000 jobs in California depend on trade with Mexico.

When I met the Lieutenant Governor of California Eleni Kounalakis during my first month in Mexico, she told me that she and a trade delegation had selected Mexico for their first trip outside the United States to emphasize just how important Baja California and Baja California Sur are to the U.S. economy.

Now, with USMCA on the horizon, trade between Mexico and the United States is poised to reach unprecedented levels and Calibaja is in a strategic position to benefit.  I know it will help you build on your successes and we look forward to further expanding two-way investment.

You all have become pioneers in binational cooperation, with initiatives like the Cross-Border Xpress – which has seen more than 5 million passengers since its opening, the Smart Border Coalition, the San Diego Regional Chamber of Commerce, and the reestablished Commission of the Californias.

I can’t tell you how much I respect and value this joint work that is being done, not just at the national level between the two governments, but at the state and local level. I think this is a magnificent example of how all levels, and civil society as well can work to make life better for everyone.

Since my time in Mexico I’ve visited nine Mexican states, including Baja California.  Yesterday I had the privilege of meeting dozens of leaders who are creating the future of this region.  From entrepreneurs to professors, businesspeople, and community activists, they are all dedicated to positive change.

I believe that the best way to unite our countries is through collaboration and cooperation at all levels. We need to work together to address the toughest challenges, especially those that know no border.

I want to thank all of you for being a part of this crucial work and for being here today to celebrate an achievement that your collaboration, innovation, and advocacy helped achieve.

I am pleased that right here, in one event, key actors from all sectors of this thriving megaregion are represented.  You demonstrate that this border ties us as neighbors, but our will to find solutions to shared challenges, through cooperation, dialogue, and friendship unites us even more.

So, it is a real honor for me to be here, thank you for inviting me to this facility.  I look forward to, hopefully during my tenure, being present at the inauguration of even more such facilities. And I think it can only help people of both countries.

Hopefully it won’t be as windy at the next one.  But I thank all of you for your patience, thank you so much, muchas gracias, and congratulations.