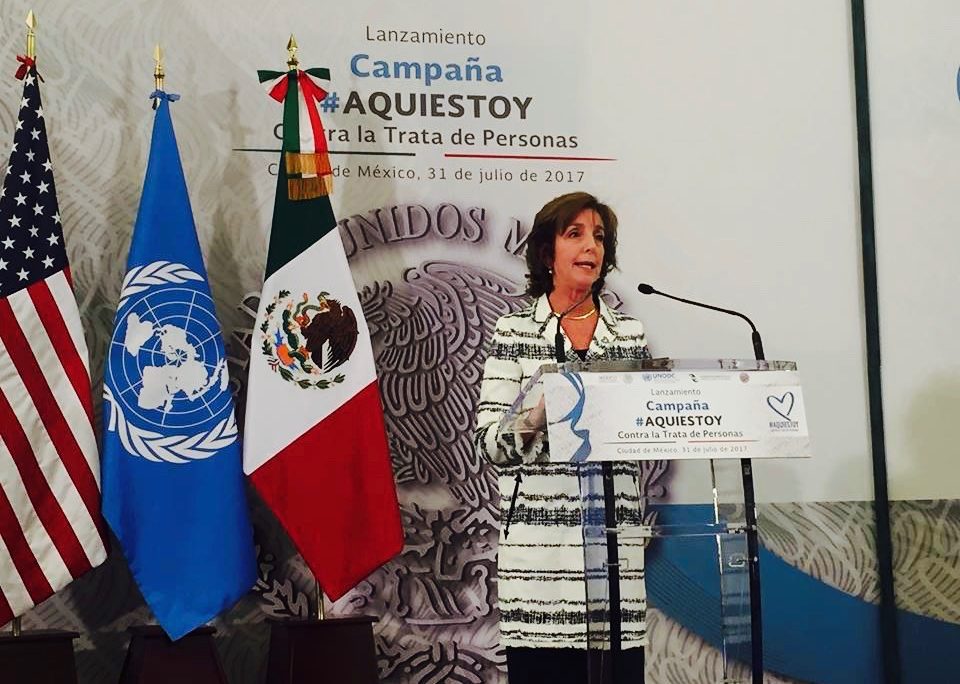 Remarks by Ambassador Jacobson at the Launching of the Blue Heart Campaign 2.0 “#AQUÍ ESTOY” Against Trafficking in Persons

Welcome to all and thank you for the invitation and your presence here today.

As we commemorate the World Day Against Trafficking in Persons, and as we participate today in the launch of the Blue Heart Campaign 2.0 “AQUÍESTOY” against trafficking in persons, I would like to remember all of the girls, boys, women and men who have been victims of this terrible scourge.

We work together diligently so that these victims can find justice. In terms of the international cooperation between Mexico and the United States, that work on bilateral investigations has resulted in traffickers being tried in court in the United States and Mexico. Additionally our support to the AMBER Alert program in Mexico under the Merida Initiative has resulted in the rescue of 574 children.

I would like to thank the government of Mexico for their commitment to collaboration on this massive effort. I would also like to thank the many state governments for their work as they are also in the trenches combatting this crime. However, these success stories don’t only depend on governmental efforts, but on the efforts of citizens who provide information to authorities. That’s why it is so important to raise awareness about the characteristics of human trafficking and the resources that are available to fight it.

To that end, the U.S. Embassy has supported UNODC to develop this new phase of the Blue Heart campaign. It is a campaign that has already raised public awareness about the profound negative impact of human trafficking. The campaign inspired the young artist Ilse Maria from Ensenada to create a super heroine that won the Art vs. Violence contest run by our consulate in Tijuana. In the words of her creator, “Her name is Blue Heart and her weapon is special scissors that cut chains. Her special power is an ear so sensitive that she can hear what you are thinking during a conflict.”

Today we have some super heroes among us – and I’d like to give a well-deserved recognition to the civil society representatives. Without your support, it would be very difficult for us as governments to reach both the victims and the traffickers, and channel their cases through to final resolution in the judicial system. Thank you for this enormous benevolent effort.

In conclusion, I cannot emphasize enough the importance of addressing trafficking in persons in its entire magnitude. It is a crime that crosses borders, and that affects some of the most vulnerable members of our society. It is a crime that we can all do much more to combat and prevent. It is our responsibility as government, international organizations and civil society to fight this scourge.

That is the only way we can provide relief to every boy, girl, woman and man who has been a victim of this insidious crime.