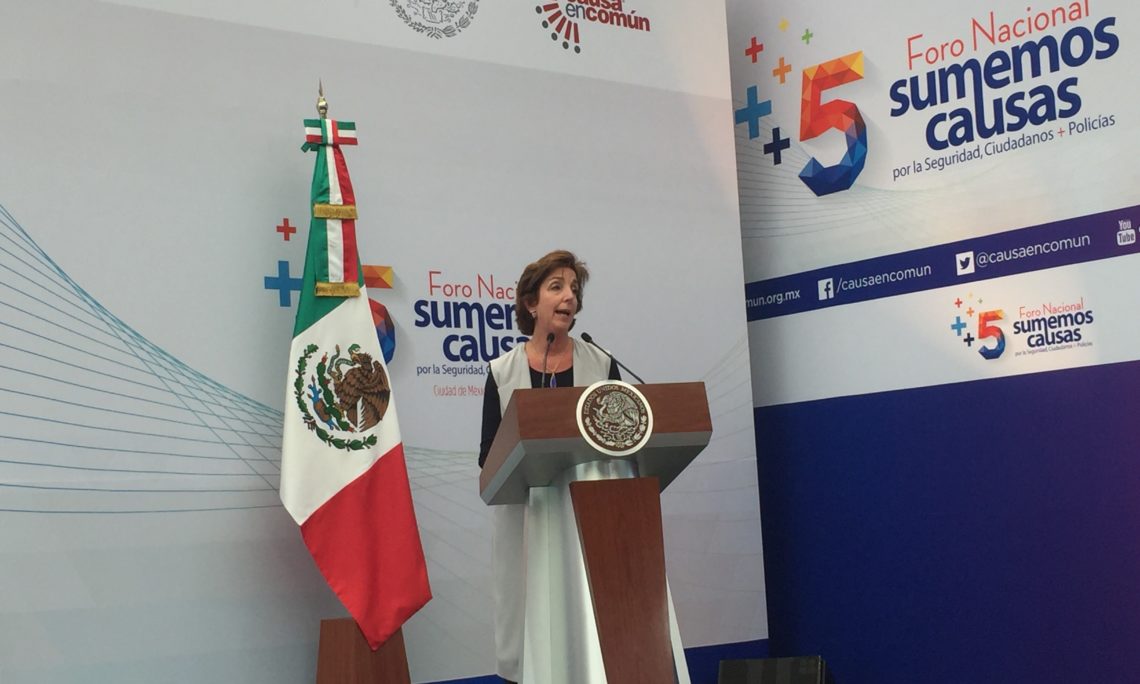 I want to express my thanks and a special recognition to María Elena Morera and Causa en Común for their tireless and selfless work in support of a Mexican police force that is more professional, trustworthy, and closer to the community. The efforts of Causa en Común and other civil society groups, combined with the efforts of government officials, are creating positive change for Mexican society.

And I know that Mexico is working hard to build that trust. In fact, many of you in this room are building that trust every day. The average citizen is more likely to interact with a police officer than any other actor in the justice system. That interaction will be more positive and productive if they know that policeman is trustworthy. That he wants what’s best for their community. That she cares about protecting and serving.

This morning, you discussed professional development and institutional certification for police. These standards are vitally important. After all, you wouldn’t get on an airplane without a certified pilot. You wouldn’t allow a surgeon to operate on you who had not passed her medical school exams. Certification is the bedrock of any profession, and insisting that all officers are certified to recognized standards protects all of us. That’s why, through the Merida Initiative, the United States and Mexico are working together to provide training, and 238,000 officers are now ready to manage crime scenes, collect evidence, identify witnesses, and testify in court to support the new criminal justice system.

Beyond standards and certification, it is vital that police work is considered a profession, not just a job.

Accreditation of police departments means citizens can trust that cadets are being trained in basic policing skills that include use of force and human rights. It means that drug cartels won’t be operating freely inside prisons.

Causa en Comun is a perfect example of civil society working to build trust between Mexican citizens and their security and justice institutions. Their Semaforo del Desarrollo Policial calls for accountability in government efforts to develop and professionalize the police. This report shows which states have committed to certifying and vetting their police and which have not.

It will take a great deal of citizen participation to make sure this system is doing its job. In the new system, it is our responsibility to speak up, to report what you see, and to make suggestions about how to improve things. It is the collective job of all citizens to report injustices when we see them, and keep the system in check.

It is an honor to be here, to be a part of this historic and remarkable process. It is important for Mexico, and it is important for the United States, that we get this process right. Our shared prosperity depends on ensuring the collective security of North America. And for that reason, the United States stands by Mexico in this transition and in this consolidation, and will continue to do so for years to come.