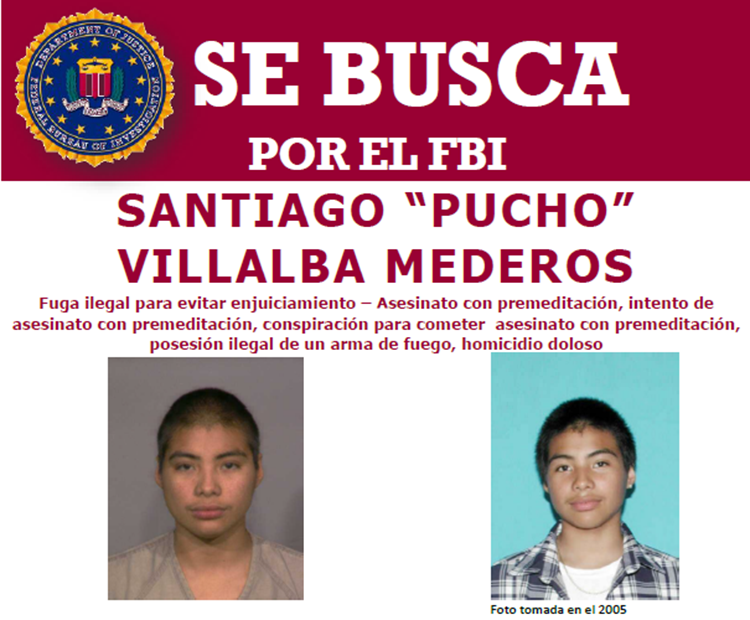 The FBI and Tacoma Police Department are seeking the public’s help in locating a fugitive whom investigators believe is responsible for murders in the Tacoma, Washington area. Santiago “Pucho” Villalba Mederos, 25, may be in Mexico and speaks both English and Spanish. Villalba Mederos is known to have family living in the Las Grutas, Guerrero and Cuernavaca, Morelos areas of Mexico and also has ties to Washington State.

A reward of up to $20,000 is offered for information that leads to the arrest and extradition of Villalba Mederos.

Villalba Mederos was allegedly involved in violent criminal activity again on March 25, 2010, when he and other gang members purportedly went to collect money from a person they knew. According to investigators, Villalba Mederos and other gang members broke into and ransacked that person’s vehicle. Several innocent bystanders observed this situation and confronted the group. A fight ensued during which Villalba Mederos allegedly fired a single gunshot towards the bystanders, striking and killing an innocent 25-year-old male victim. On March 30, 2010, the Pierce County Prosecutor’s Office charged Villalba Mederos with Murder in the Second Degree in the Superior Court of Washington and an additional warrant was issued for his arrest.

On September 30, 2016, a federal arrest warrant was issued for Villalba Mederos in the United States District Court, Western District of Washington, Tacoma, Washington, after he was charged with unlawful flight to avoid prosecution.

Tacoma Police Department is investigating the murders and other criminal activity. The FBI is assisting with the international investigation. The Pierce County Prosecutor’s Office and the U.S. Attorney’s Office filed the charges as part of this collaborative effort to seek justice for the victims.