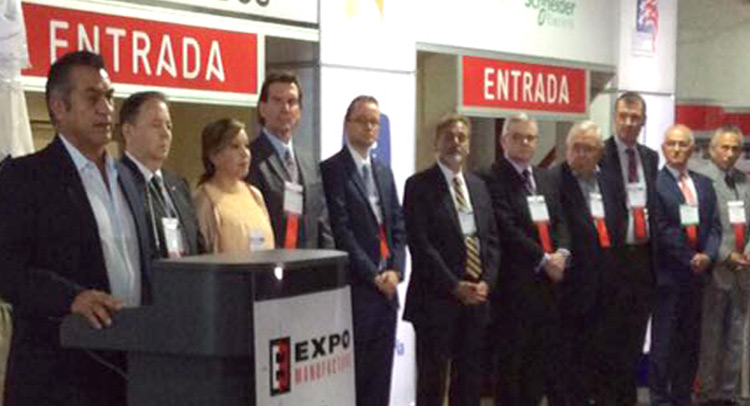 On February 2, 2016, PCO Alan Long participated in the opening ceremony for the 20th edition of Expo Manufactura in Monterrey.  PCO Long was one of four speakers during the ceremony.  The other speakers included Jose Navarro, Director of EJ Krause, Guillermo Dillon, Director of the local Industry Association and Nuevo Leon’s Governor Mr. Jaime Rodriguez Calderon.

During his speech, PCO Long emphasized the long history of EJ Krause and the U.S. Department Commerce working together to promote Expo Manufactura in both the U.S. and Mexico.  He further noted that in the 20 year history of Expomanufactura in Monterrey, the show had earned U.S. Department of Commerce certification for 19 of those years.  He also pointed out that this year the number of U. S. companies totaled 36 exhibitors, with 21 of those exhibitors participating at the U.S.A. Pavilion. He conclude by inviting the press and show visitors to stop by U.S. exhibitors booths inside and outside the U.S.A. Pavilion.  He also strongly encouraged the audience seek-out and talk with CS Monterrey Commercial Specialist Mario Vidana and Trade Specialist Kellie Holloway, from our Portland Office, to learn more about this sector and the offerings of U.S. companies.