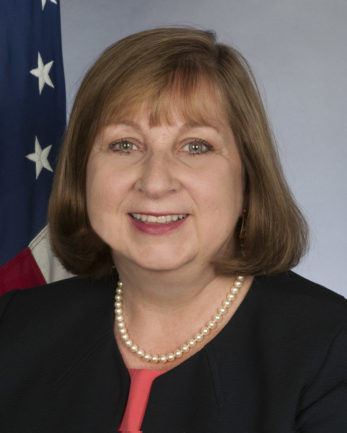 Sue Saarnio is a career Foreign Service Officer with more than 30 years of experience on international trade and economic issues in the U.S. State Department.  She started her Foreign Service career serving in the U.S. Embassy in Mexico City.   She most recently served as Principal Deputy Assistant Secretary in the Bureau of Energy Resources and Senior Advisor in the Bureau of Oceans, International Environmental and Scientific Affairs.  Prior to that, she served as the Deputy Assistant Secretary of State for Mexico, Canada, and Regional Economic Policy in the Bureau of Western Hemisphere Affairs.

She has served in the State Department’s Economic, Energy and Business Affairs Bureau as Deputy Special Representative for Commercial and Business Affairs and Director for Multilateral Trade Affairs. She was the U.S. Special Advisor for Conflict Diamonds.  She also has served at U.S. Embassies in Ottawa, Panama, and at the U.S. Consulate General in Jerusalem.

Prior to her government service, Ms. Saarnio worked as a journalist in Montana and Minnesota. She is a graduate of Macalester College in St. Paul, Minnesota, and attended the American University in Cairo, Egypt.  She has two children.