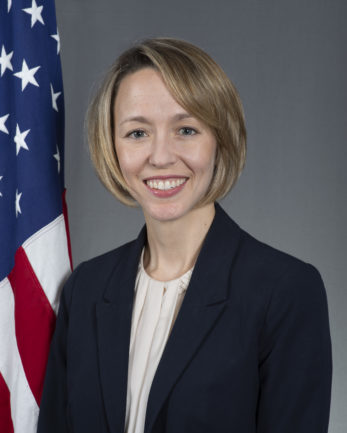 Courtney Beale is the Principal Officer at the U.S. Consulate General in Merida, Mexico.  Previously, she was the Public Affairs Officer at the U.S. Embassy in Havana.  Prior to Havana, she served as Senior Director of the Global Engagement Office and Special Assistant to the President at the National Security Council.

Courtney served in overseas assignments in Monterrey, Mexico; Islamabad, Pakistan; Bogota, Colombia; and New Delhi, India.  In Washington, she was the Office Director for Strategic Planning in the Public Affairs Bureau, a Special Assistant to the Secretary of State, and a member of the Line in the Executive Secretariat.

Courtney graduated with a Masters in Public Policy from Princeton University and a Bachelors of Science in Foreign Service from Georgetown University.  She is a term member in the Council of Foreign Relations and fluent in Spanish, Hindi, and Urdu.  She and her husband Scott have two young sons.