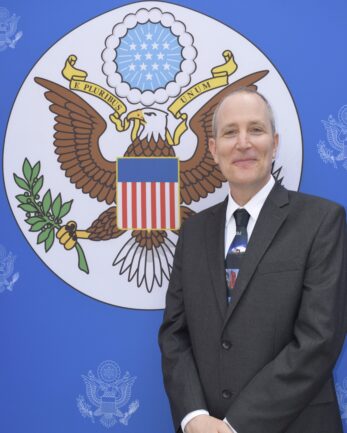 Eric S. Cohan began his tenure as the Consul General of the United States in Ciudad Juarez in August 2020.  He came to Mexico from Islamabad, Pakistan, where he was the Minister Counselor for Consular Affairs.  Prior to that, he worked as a senior advisor in the Bureau of Consular Affairs in Washington, and before that, he spent four years as the Deputy Principal Officer / Consular Section Chief in Ciudad Juarez.  Mr. Cohan’s earlier assignments were in Colombia, the Dominican Republic, Ecuador, Venezuela, the Office of Visa Services, and the Bureau of Legislative Affairs.

Before entering the U.S. Foreign Service, Mr. Cohan was an investigator and supervisory investigator with the U.S. Equal Employment Opportunity Commission, taught math and science in Arkansas, and worked as an engineer in Pennsylvania.  He holds a bachelor’s degree in Engineering from the University of Virginia and a master’s degree in National Resource Strategy from the Dwight D. Eisenhower School for National Security and Resource Strategy.