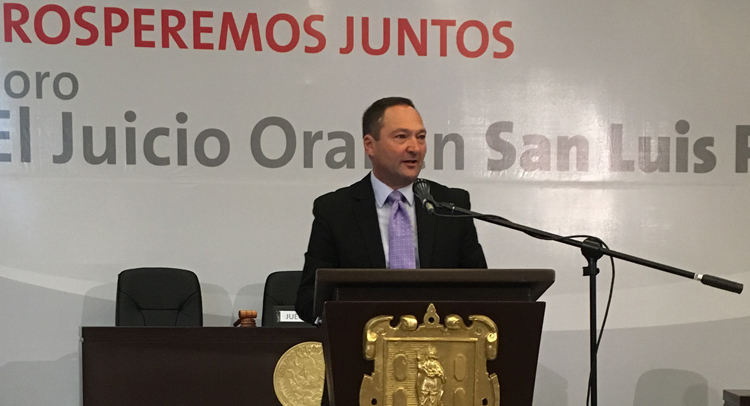 On May 12-13, 2016 the Conference of Western Attorneys General (CWAG) hosted its Forum on Oral Trials, attracting close to 400 members of the legal profession from San Luis Potosí including personnel from the Attorney General’s office, the Public Defender’s office, law school students and faculty, bar associations, and private attorneys. Senior litigators from the U.S., including District Attorney John Haroldson (Benton County, OR) and Anthony Da Silva, Deputy Attorney General, California Department of Justice, made presentations during the event that also featured a mock oral trial. The event is part of United States government’s support for Mexican public sector legal professionals and is funded under the U.S.-Mexico Mérida Initiative. The Forum was inaugurated by San Luis Potosí Attorney General Federico Garza Herrera.

The United States government supports the consolidation of the accusatory system in Mexico through capacity building programs for federal and state judges, prosecutors, defense attorneys, criminal investigators, forensics experts, and other members of the judiciary, as well as for university law students and professors. Since 2008, under the Mérida Initiative, CWAG has trained over 25,000 members of the legal and law enforcement communities in Mexico through study tours in countries operating under an accusatory system, seminars and forums. Through other programs funded under the Mérida Initiative, the United States government is supporting the training of 1,600 police officers as First Responder Instructors, helping to equip courtrooms for oral trials, and assisting forensics labs to achieve international accreditation.