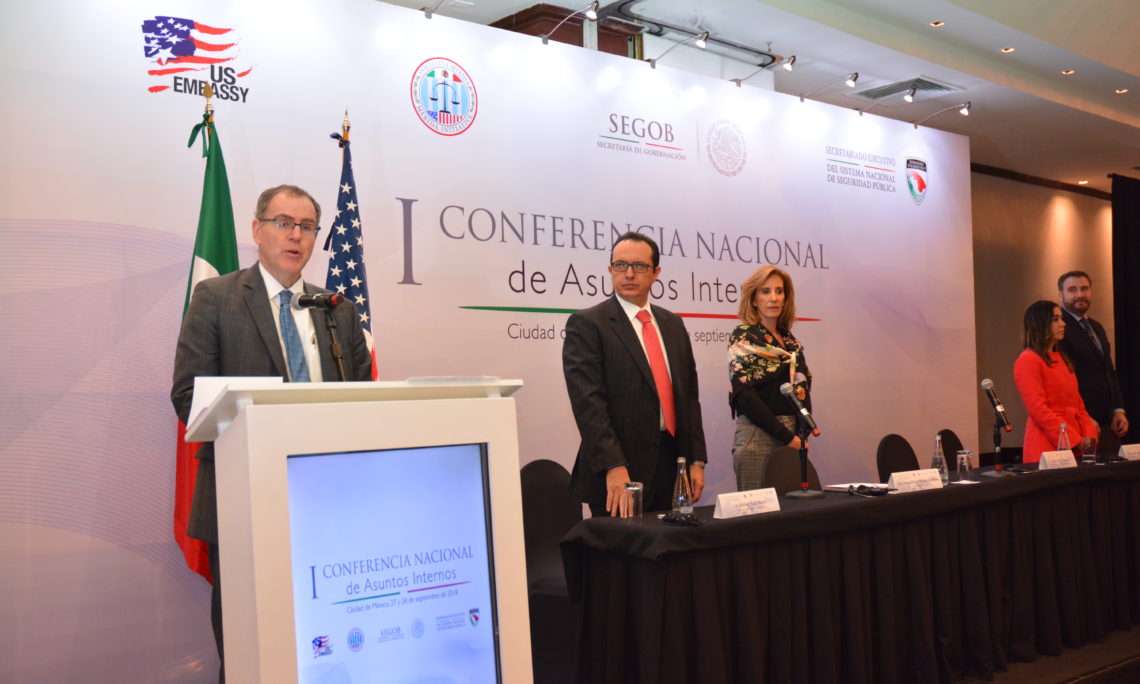 Mexico City, September 27th, 2018 – The Chargé d’Affaires of the U.S. Embassy in Mexico, John S. Creamer, inaugurated today the first National Conference on Internal Affairs. Internal Affairs units investigate possible violations to the disciplinary regime of the police forces. The conference will help standardize processes, share experiences, and exchange best practices in support of the internal affairs units in all of Mexico – a key cornerstone of the work done by the Merida Initiative on police professionalization.

The event was also presided by Rafael Ruiz Mena, General Academic Secretary of INACIPE; Dr. Julieta Morales Sanchez, Director General of the National Center for Human Rights; and Maria Elena Morera, President of Causa en Común. Participants include state secretaries of public security, state attorneys general, and heads of the internal affairs units from Mexico. Experts from the United States, Mexico, Chile, and Colombia will give presentations on best practices in internal affairs, transparency and accountability, accreditation standards of units and certification of investigators, and human rights. The conference constitutes a solid step towards the establishment of standards and national certifications that add value and identity to Internal Affairs units in Mexico.

“Within the framework of the Merida Initiative, the United States supports Mexico in its pursuit of accreditation of state police departments, training academies, communication centers, forensic labs, and all state and federal prisons. Beyond the accreditation of the institutions where they work, we seek the certification of all actors in the chain of justice, starting with a national certification of all Mexican police through the Certificado Único Policial,” said the Chargé d’Affaires of the U.S. Embassy in Mexico during the inauguration.