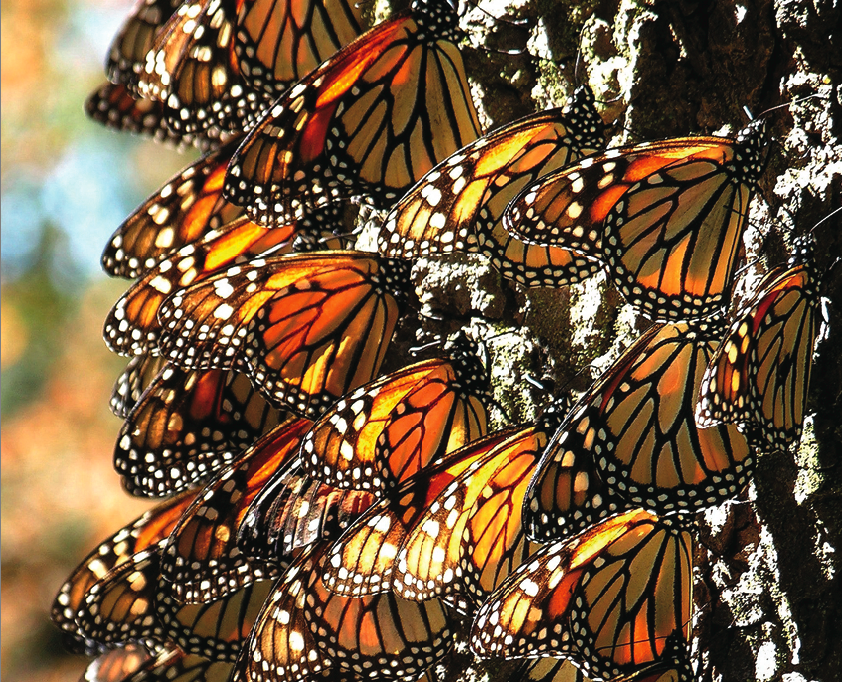 The area occupied by the monarch butterfly in the pine and sacred fir [oyamel] forests in Mexico State and Michoacán totaled 4.01 hectares, three times more than last season’s 1.13 hectares.

According to monitoring data from the National Commission on Protected Natural Areas (Comisión Nacional de Áreas Naturales Protegidas—CONANP), in conjunction with the World Wildlife Fund (WWF), this area represents an increase of 255 percent with respect to the 1.13 hectares reported in December 2014.

The news was released during a press conference headed by Alejandro del Mazo Maza, National Commissioner for Protected Natural Areas, accompanied by Dan Ashe, Director of the US Fish and Wildlife Service (USFWS), and Gilles Seutin, Chief Scientist, Ecosystem Sciences, Parks Canada, on behalf of the Canadian government.

Lucie Robidoux, Program Manager, Ecosystems and Sustainable Communities, at the Commission for Environmental Cooperation (CEC) of North America, and Enrique Lendo Fuentes, Head of the International Affairs Coordinating Unit for Mexico’s Ministry of Environment and Natural Resources (Secretaría de Medio Ambiente and Recursos Naturales—Semarnat), were also present at the conference.

The representatives of the three countries noted that they were encouraged and surprised by the results obtained this season, as this result represents major progress towards the trilateral goal of attaining six hectares of woodland area by 2020, stating that this achievement is an impetus to keep working for the benefit of this emblematic species of North America.

Alejandro Del Mazo said that the figures released today point to an upward trend, reinforcing the close collaboration with Canada and the United States to consolidate these collective efforts.

“I am encouraged by the good news coming out of Mexico, an indication that we have the ability to save the North American monarch butterfly and with it one of the most remarkable wildlife migrations on the planet,” said US Fish and Wildlife Service Director Dan Ashe. “But there is much more we need to do and it will take a coordinated citizen effort on a scale never before seen.”

“Everyone in North America can play a role in helping us reach our goal of a quarter of a billion monarch butterflies by 2020. A simple stand of native milkweed can make every backyard, school, community center, city park and place of worship a haven for breeding or migrating monarchs, and together we can bring about the greatest citizen conservation victory of our generation,” he added.

Canada’s Gilles Seutin said: “Canada is committed to conserving the monarch butterfly and is working closely with Mexico and the United States to coordinate our research, monitoring and conservation efforts.  Canada is encouraged by the new population numbers. We will continue to work collaboratively to help sustain and build upon this momentum.”

Given the decline in the population observed in recent years, on 19 February 2014 in the framework of the North American Leaders’ Summit, the three countries established a mandate to create a trinational High-Level Working Group for the Conservation of the Monarch Butterfly Migratory Phenomenon.

The group agreed to focus on three strategic priority issues: conservation and restoration of the different habitats the monarch requires in the three countries; communication and citizen engagement; and monitoring and research.

To follow up on the trilateral agreements established by the group, a trilateral meeting was organized by the CEC in Mexico City from 22 to 26 February, featuring the participation of the government agencies that have coordinated the collaborative efforts, Environment and Climate Change Canada, Parks Canada, the US Department of the Interior, USFWS, Semarnat, the Mexican National Commission for Protected Natural Areas (Comisión Nacional de Áreas Naturales Protegidas—CONANP), as well as researchers, academic institutions and nongovernmental agencies.

At the meeting, representatives defined the trilateral communication strategy to strengthen citizen engagement in the monarch butterfly conservation efforts. The trilateral scientific collaboration group also held its first meeting, where experts shared knowledge and experiences in monitoring and research, and developed a strategic plan for scientific collaboration to support decision-makers in their conservation efforts.

Representatives also conducted a field visit at the Piedra Herrada Sanctuary in the Valle de Bravo Natural Resource Protection Area in Mexico State, where they were received by community residents and the CONANP-WWF team responsible for monarch monitoring, who explained the methodology used. They also met with community technicians and park rangers who work at the Monarch Butterfly Biosphere Reserve, with the support of the USFWS, to complete their technical training.

The monarch butterflies (Danaus plexippus) that hibernate in Mexico migrate up to 4,200 kilometers from Canada and the United States to set up their colonies in the temperate sacred fir and pine forests along the boundary between Michoacán and Mexico State.

Since the 2004–2005 season, the WWF-Telcel Alliance, in conjunction with CONANP’s Monarch Reserve Office under Semarnat, has monitored monarch butterfly hibernation colonies in Mexico. This report includes the woodland area occupied by butterfly colonies, as an indirect indicator of the density of these butterflies in Mexican sanctuaries during the 2015–2016 season.