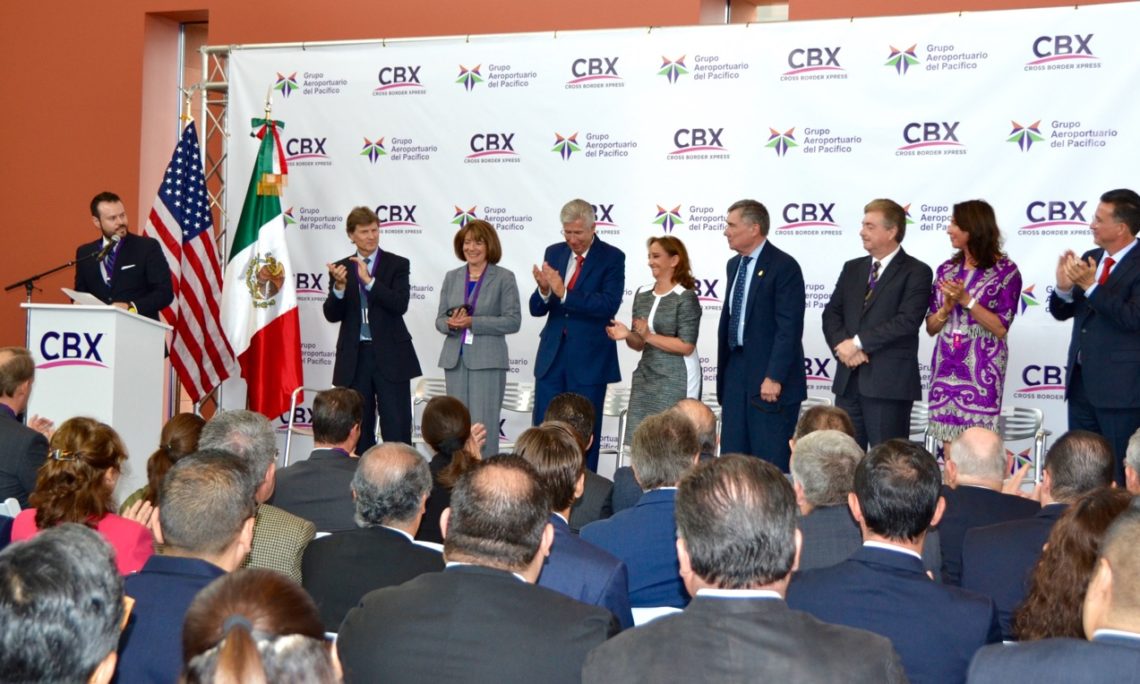 April 7, 2016 (San Diego) – Cross Border Xpress (CBX) and Grupo Aeroportuario del Pacífico (GAP) welcomed federal, state and local officials and dignitaries from the United States and Mexico to formally inaugurate the only international border crossing in the world that connects directly to an international airport.  CBX, an innovative partnership between the private and public sector, opened on December 9, 2015, connecting a new terminal in San Diego directly to the Tijuana International Airport (TIJ) via an enclosed passenger bridge that spans the U.S./Mexico border. The project highlights positive private and public sector engagement to modernize our border, simplifying customs clearance for ticketed airline passengers

Laura Diez Barroso de Laviada, Chairperson of Grupo Aeroportuario del Pacífico and a shareholder of CBX, hosted governmental partners for a private ceremony on April 7, 2016. The official inauguration took place in the middle of the bridge, at the demarcation of the border between the two countries, featuring a ribbon cutting, followed by a press conference and official remarks in the Arrivals Concourse of the CBX facility.  Honored guests included:

CBX is open 24 hours per day, 7 days per week, and serves an average of 2,000 passengers per day on a typical day, while approximately 5,000 passengers per day have used CBX during peak holiday travel periods.  The facility is designed to U.S. and international security standards, with U.S. Customs and Border Protection (CBP) operations located within the CBX facility in the United States.  The privately owned facility was developed by Otay Tijuana Venture, LLC, a binational partnership of private Shareholders.

BACKGROUND: Cross Border Xpress (CBX) is an enclosed pedestrian toll skywalk for Tijuana Airport (TIJ) passengers crossing the U.S./Mexico border. Spanning 390 feet, the bridge is a short five minute walk that connects San Diego and TIJ, serving the two million annual passengers who cross the border and use the airport as part of their travels.  Users of the bridge can access more than 30 destinations within Mexico that TIJ offers, including direct flights to Shanghai.