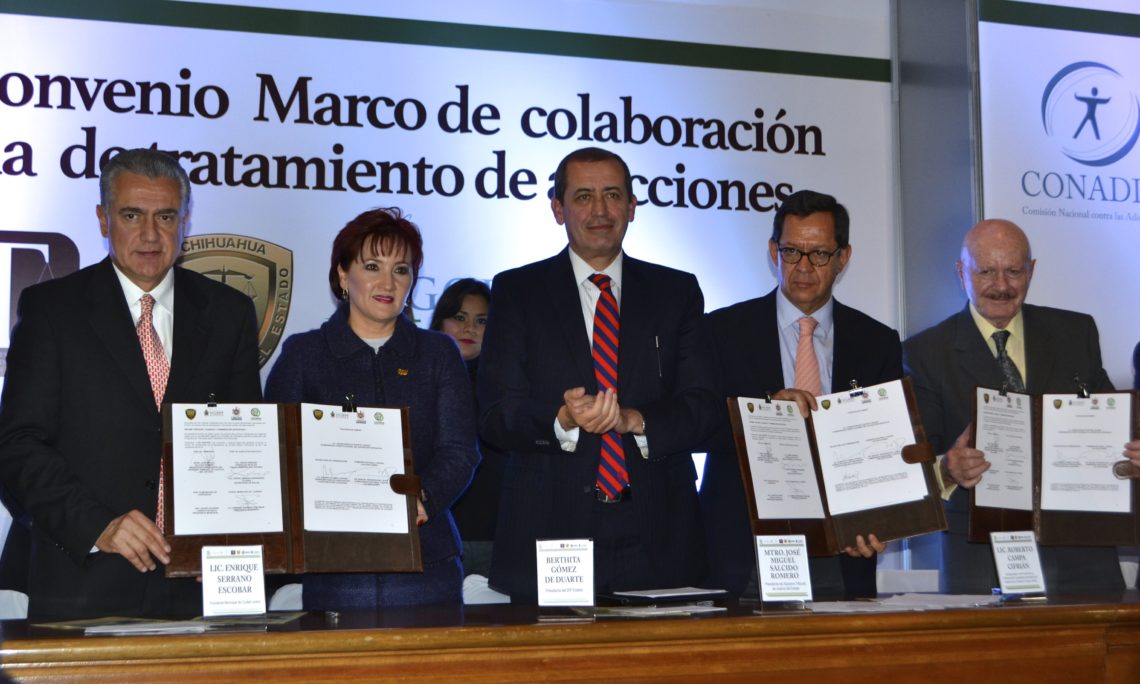 Ciudad Juárez, November 7, 2014 – Consul General Ian Brownlee attended the opening ceremony of the first Drug Treatment Court (DTC) in the state of Chihuahua.  Presided over by Chihuahua Health Secretary representing the Governor Pedro Hernandez Torres, the Commissioner of the National Commission against Addictions Manuel Mondragón y Kalb and the Undersecretary for Violence Prevention and Citizen Participation in the Secretariat Roberto Campa Cifrián, this opening makes Chihuahua the fourth state in Mexico to have implemented DTCs. This expansion of DTCs in Mexico has been supported through the bilateral U.S.-Mexico Merida Initiative.

Since 2009, the Merida Initiative has provided technical assistance for the creation and expansion of drug treatment courts in Mexico and contributed $2.5 million to the Organization of American States to implement new courts in additional Mexican states.  These efforts are helping to build Mexico’s capacity to diagnose and treat substance abuse and provide more cost-effective and sustainable alternatives to incarceration for addicted offenders.

“With the opening of the Drug Treatment Court in the State of Chihuahua, four states in Mexico now have Drug Treatment Courts, including the State of Mexico, Nuevo León and Morelos,” said Consul General Brownlee.  “The Merida Initiative has also funded training and the development of procedural handbooks, needs assessments, court management tools, and a diagnostic study.  These activities help build more stable and resilient communities by rehabilitating violent and other addicted offenders and helping them to return to their communities as productive members of society.”

“These courts are a clear result of the search for creative solutions to address the current challenges that stem from the consumption of addictive substances and the commission of crimes”, said Pedro Hernandez Torres, Chihuahua Governor’s Representative. Hernandez added, that with the signing of the agreement, Chihuahua State authorities acknowledge “the clear relationship that exists between justice and public health.”

In December 2008, Mexico and the United States signed the Merida Initiative agreement, opening a chapter of historic cooperation and acknowledging the shared responsibilities of the United States and Mexico to counter the effects of organized crime threatening citizens on both sides of the border.  Through five years of implementation, the Merida Initiative has led to increased security cooperation, provided tangible support to Mexico’s security and judicial institutions, and helped to galvanize efforts to stop the flow of weapons, illicit funds, and narcotics.  To date, the Merida Initiative has delivered to the Mexican Government nearly $1.2 billion in equipment and training.