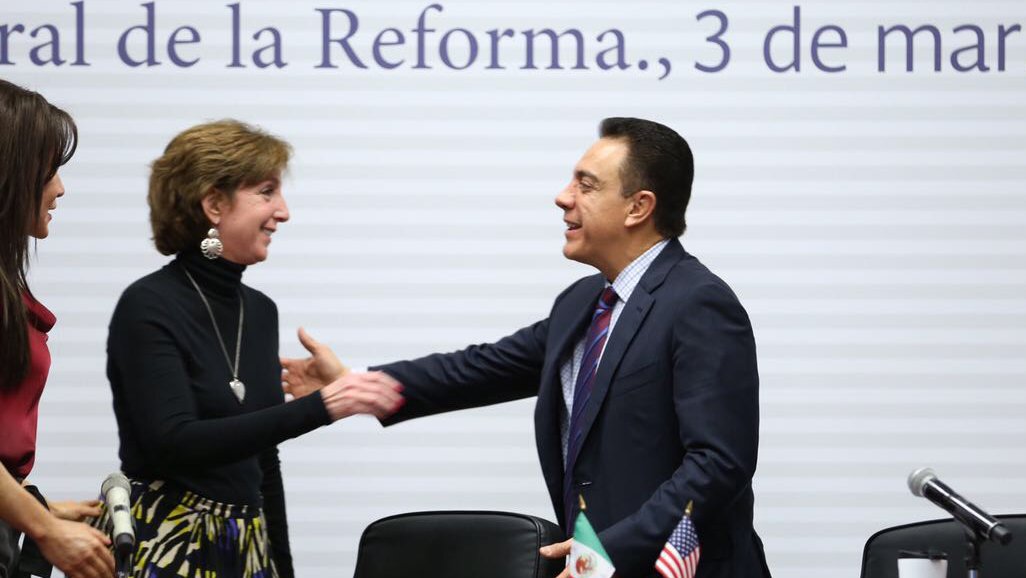 Omar Fayad Meneses, Governor of the state of Hidalgo, greets Amb. Jacobson at the ceremony to commemorate the donation of firearms simulators.

Mexico City, March 3, 2017 – Today, at the Hidalgo State Police Training Institute, Ambassador Jacobson commemorated the donation of firearms simulators to police academies and federal training institutes across Mexico.  The donations are part of a larger program under the Merida Initiative that seeks to develop a professional police force that serves the public safety needs of citizens.  These simulators use immersive technology to create realistic and interactive scenarios where trainees learn to manage unexpected situations, with a goal of deescalating aggression and only discharging their weapon when necessary.  The simulators also provide a safe, controlled environment for trainees to perfect their marksmanship with more precise feedback than traditional firing ranges.

In her remarks to nearly 200 representatives of state Public Security Secretariats and police academies, Ambassador Jacobson noted that “Transnational organized crime is the classic example of a shared problem, and that is‎ why we are spending unprecedented sums of money in the United States to reduce the demand there for illicit drugs. That is also why we are proud to support your efforts to strengthen police forces here in Mexico.  Neither country can meet this challenge alone.  We must work together.  But it takes more than money.  It takes government and law enforcement leaders who have a vision and the will to make it a reality.”

The Ambassador was welcomed by Alvaro Vizcaino Zamora, Executive Secretary of the National Public Security System and the Governor of Hidalgo, Omar Fayad Meneses.  The U.S. Embassy coordinates the firearms simulator donations through the Executive Secretariat of the National Public Security System (SESNSP), with a goal of every state-level police academy receiving a fixed and/or mobile simulator by early 2018. State academies in Durango, Tamaulipas, Hidalgo, Puebla, Morelos, Mexico City, and Mexico State, as well as Federal Police and Federal Attorney General office training institutes have received simulators and since August 2016 nearly 6,500 agents have been trained on this equipment.

Remarks by Amb. Jacobson at the ceremony (Spanish)