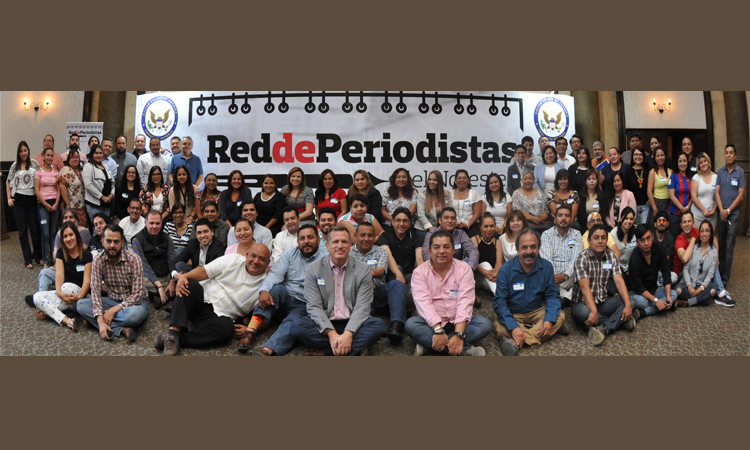 Monterrey, Mexico- With nearly one hundred journalists from six Mexican states, the Network of Journalists of Northeast Mexico and the U.S. Consulate General in Monterrey hosted the second meeting of journalists held June 23-25, 2017 in Monterrey. The three-day interactive workshop included professional trainings and was sponsored by the Merida Initiative office of the U.S. Embassy in Mexico. The participants discussed safety and security of journalists covering high-risk stories, cyber-security, journalism under the new transparency law, and Mexico’s new accusatory legal system, among other topics. They also covered the broad work of the bilateral Merida Initiative. Ambassador Roberta Jacobson addressed the audience during the inauguration in a recorded message and Consul General Timothy Zúñiga-Brown welcomed the professionals from the states of Coahuila, Durango, Nuevo Leon, San Luis Potosi, Tamaulipas, and Zacatecas. Renowned speakers included Sister Consuelo Morales, director and founder of Citizens in Support of Human Rights, María Elena Morera of Common Cause, Jesus Gonzalez Ramirez of Civic Alliance Nuevo Leon, Juan Manuel Ramos of Redes Quinto Poder, Bernardo Gómez del Campo of Regional Security Missions, Jorge Luis Sierra of the Border Center for Journalists and Bloggers, Marco Lara Klahr of the Institute of Criminal Procedural Justice, Reyna Karina Torres, Judge of the Second Judicial District of the Sixth Region of the Accusatory Criminal System in Tamaulipas, and Tobin Bradley, director of the Mérida Initiative at the U.S. Embassy in Mexico. This workshop is an integral part of on-going support of the U.S. Embassy for Mexican journalists, the principles of freedom of expression, and a free press.

Ambassador Jacobson during her message

Instructor during the training