Colonel Ricardo González, Lieutenant Colonel Janina Reyes, Major Michelle Augustine, Mister Joe Alotto, Staff Sergeant CJ Patlán, Colonel Eric Rojo, veterans, and distinguished guests, thank you for joining us today on this solemn occasion, in which, as a nation, we remember the free men and women who paid the ultimate price for our country. 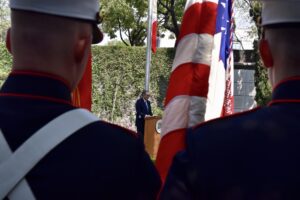 It is a great honor for me to be here with you.  In a few minutes, I will have the high privilege of laying a wreath to remember and pay tribute to the fallen heroes who gave their lives for a cause, as President Lincoln said, “a cause for which they here gave the last full measure of devotion…”

I would especially like to thank the American Battlefield Monuments Commission and the American Legion, “Alan Seeger Post II,” for their service.   Thanks to you work, we have a place to remember and pay tribute to thousands of American soldiers – fathers, mothers, sisters, and brothers – who are part of an unbroken chain of brave men and women, all of whom gave their last breath so our freedom could endure.

Today, we join our fellow citizens all over the world to honor the sacrifice, courage, and selflessness of the thousands of American service members who gave their lives to fulfill their oath to our nation and their fellow Americans.

When I served as the Civilian Deputy to the Commander and Foreign Policy Advisor, U.S. Southern Command, I saw the commitment and determination of my military colleagues, who, without any doubt or hesitation, were ready to give “the last full measure of devotion” to keep the United States and its people safe and secure.

Now, as we remember our fallen heroes, Walt Whitman’s words resonate with strength in our hearts, as we know “the ship is anchor’d safe and sound, its voyage closed and done.  From fearful trip the victor ship comes in with object won…”

In times of war and peace, they answered the call of duty driven by their love and hope.  The love and the hope of those who sacrifice themselves for their countrymen, people they may never met or never have met but who are bonded to them by the love to the United States of America.  Even now, during the pandemic, our American heroes had the extraordinary willingness to face the uncertainty of an unknown virus to protect us and to protect our country.  Therefore, the best way to honor them is to practice in our lives the values, ideals, and freedoms that they gave their own lives for. 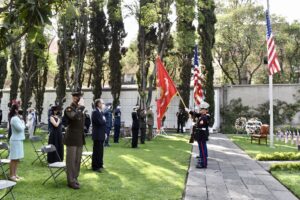 Our fallen heroes were true to their oath.  All of them embraced Alan Seeger’s words with commitment and determination: “I’ve a rendezvous with Death…And I to my pledged word am true, I shall not fail that rendezvous.”

On this solemn day, let us renew our commitment to live up to their great legacy.  At these hallowed grounds, we remember the American soldiers who set an extraordinary example of generosity, courage, and fortitude.  Whether they have their eternal rest here in Mexico, Arlington Cemetery, or in a distant land, we honor their lives and deeds because we know that we all have a great debt to them, a debt we may never fully repay.

We are proud of our fallen heroes and we are thankful they gave their all to secure our liberty and values.  We are grateful to them and to their families.  All of them will always remain in our prayers and thoughts.