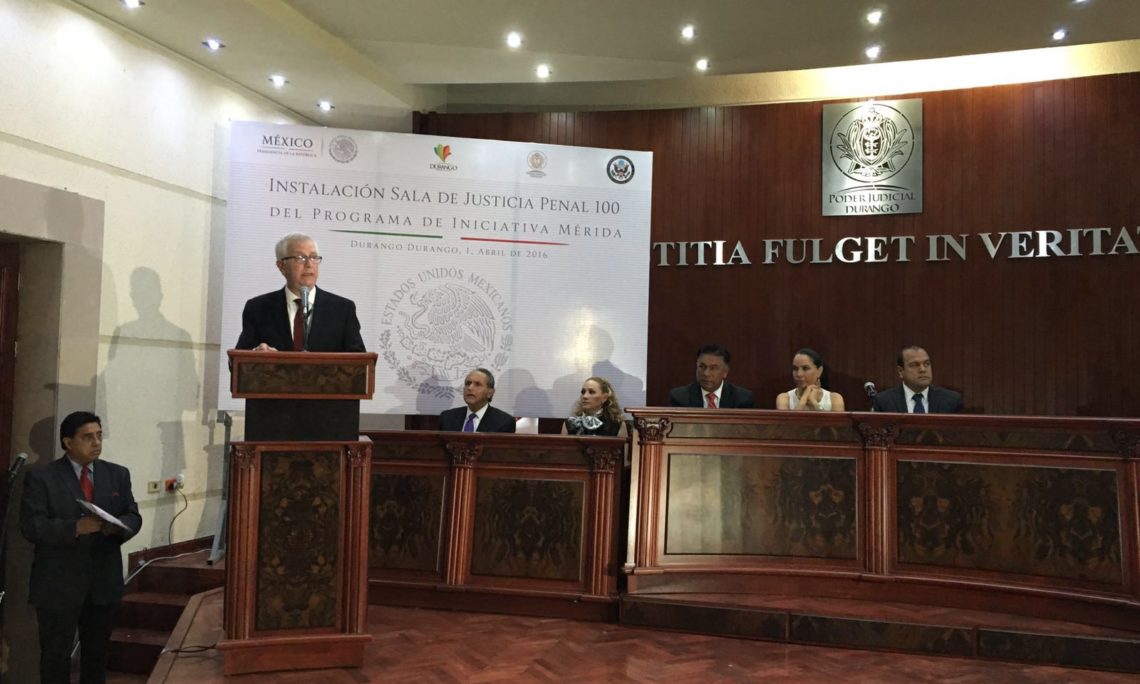 “The United States Embassy in Mexico, under the Merida Initiative, is privileged to have collaborated with SETEC to equip 100 courtrooms – seven of which are in Durango – to assist Mexico’s transition to a new justice system,” stated Mr. Kraft during the inauguration.  Kraft noted that “with the completion of 100 courtrooms, we have equipped just over 50% of the total of our commitment with SETEC.”  Mr. Kraft indicated that the U.S. government is prepared to equip additional courtrooms in response to requests from states throughout Mexico.

The equipment package provided by the United States to prepare Mexican courtrooms to conduct oral trials under the new accusatory system includes audio-visual and data storage equipment, software, and warranty and maintenance with training for operations personnel.  Prior to installation, a specialist performs an assessment of each courtroom to ensure it has appropriate facilities, including climate-controlled rooms for servers and separate areas to conduct oral trials and house witnesses.  The approximate cost of equipping each courtroom is USD105,000.

In addition, under the Mérida Initiative the United States government is supporting Mexico’s transition to a new accusatory justice system by training 1,600 police officers as First Responder Instructors, funding study tours and exchanges for members of the legal and justice professions, helping to train forensics experts, and assisting forensics labs to achieve international accreditation.

The Mérida Initiative is a bilateral security cooperation agreement between Mexico and the United States. Through eight years of implementation, the Merida Initiative has led to greater cooperation between the United States and Mexico. It has provided tangible support to Mexico’s law enforcement and judicial institutions, helped to counteract the illegal trade in narcotics, and strengthened border security. To date, the Mérida Initiative has delivered more than USD 1.4 billion in equipment, training, and capacity building assistance to the government of Mexico.