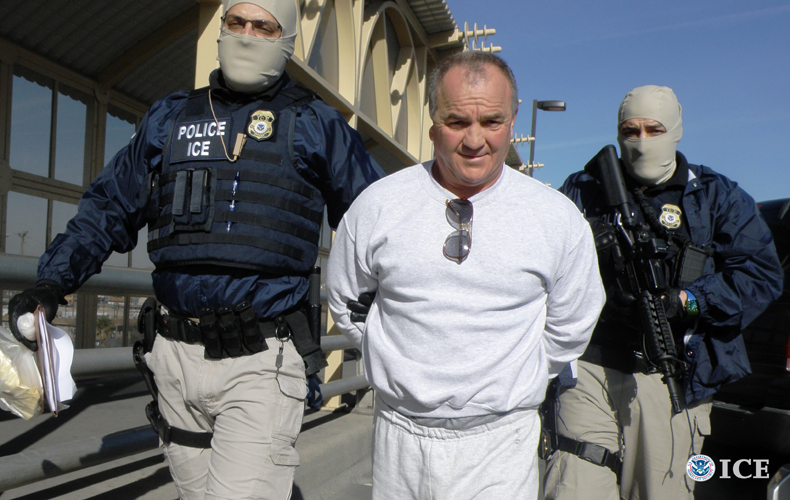 EL PASO, Texas — A fugitive criminal alien, who is wanted for murdering a Dutch national in Mexico 16 years ago, was deported Friday by officers with U.S. Immigration and Customs Enforcement’s (ICE) Enforcement and Removal Operations (ERO).

Ramiro Adame-Lopez, 51, was living and working illegally in the United States.  ERO officers turned him over to Mexican authorities on El Paso’s Stanton Street Bridge about 10 a.m. at the U.S.-Mexico international border.

Adame-Lopez is charged with the murder of Hester van Nierop, a Dutch woman who was raped and murdered in 1998. Her body was found in a hotel room in Ciudad Juarez, the Mexican city bordering El Paso.

The 27-year-old victim was en route to the United States after a short vacation with her parents and younger sister.  She planned to look for an architecture internship in the United States.

In February 2011, Adame-Lopez was arrested by U.S. Border Patrol agents and Terrell County (Texas) sheriff’s deputies for possessing marijuana with intent to distribute.  Adame-Lopez was convicted and sentenced to more than three years in federal prison in November 2011. ICE officers placed an immigration hold on him when he was first arrested.  On Jan. 15, he was turned over to ICE custody when he was released from prison in Jena, La.

In 1986, Albuquerque, N.M., police arrested Adame-Lopez for aggravated assault with a deadly weapon, receiving a stolen firearm, aggravated residential burglary, and shooting into an occupied dwelling.

Adame-Lopez, who used several aliases including Roberto Flores, had also been arrested in 1989 in Nebraska for conspiracy to distribute a controlled substance. He was sentenced to serve between five and eight years in jail.

After he served his prison time, Adame-Lopez was released to immigration officers.  In August 1998, an immigration judge ordered his deportation to Mexico.

Adame-Lopez was again arrested by Albuquerque police in 1999 for trafficking cocaine and conspiracy. In 2000, immigration officers arrested him in El Paso and charged him with falsely claiming U.S. citizenship. He posted a $2,500 bond, but absconded from his federal court trial.

Adame-Lopez’s Jan. 24 deportation resulted from the expanded bi-national cooperation to identify, arrest and repatriate Mexican fugitives who have fled to the United States to avoid prosecution.

ICE’s Homeland Security Investigations (HSI) Attaché Office in Mexico works closely with the Mexican government as part of this effort. Many of the fugitives captured in the United States are wanted in Mexico for homicide or other violent crimes.

Since Oct. 1, 2009, ERO has removed more than 720 foreign fugitives from the United States who were being sought in their native countries for serious crimes, including kidnapping, rape and murder. ERO works with ICE Homeland Security Investigations (HSI) Office of International Affairs, foreign consular offices in the United States, and Interpol to identify foreign fugitives illegally present in the country.