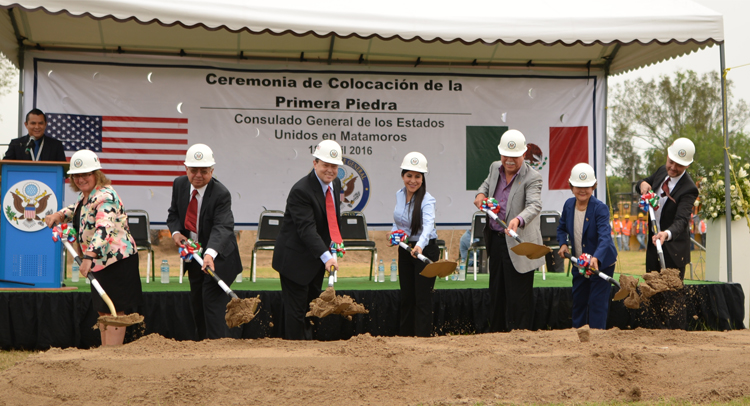 Matamoros, Tamaulipas April 18, 2016 — Chargé d’Affairs William Duncan participated in the groundbreaking ceremony today in Matamoros marking the official beginning of construction of the new U.S. Consulate General in the city of Matamoros.

Led by Chargé d’Affairs Duncan and Consul General Angela Kerwin, the ceremony marked the beginning of the construction on the site where the new consulate will be based. The Governor of Tamaulipas, Egidio Torre Cantú, and Matamoros’s Mayor, Leticia Salazar, along with Brownsville, Texas, Mayor Tony Martinez also participated in the ceremony.

The construction of the new Consulate General represents an investment of nearly $180 million U.S. dollars and shows the commitment of the U.S. government to the city of Matamoros during the coming decades. “The United States and Mexico are committed to making our border a source of shared economic opportunities. Together we build a stable, prosperous, secure, and competitive region”, Chargé d’Affairs Duncan said.

During his participation, Charge d’Affairs Duncan highlighted the work the U.S. Embassy in Mexico and its consulate in Matamoros to coordinate with authorities of all levels to strengthen ties between both nations and the border region. “The competitiveness of our region depends on our capacity to encourage innovation, to offer the people access to high level education, and to promote a work force with the necessary abilities to succeed in the global economy,” Charge d’Affairs said.