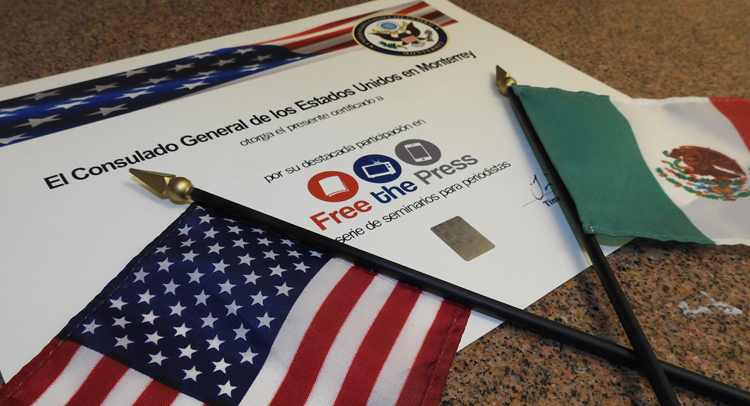 Monterrey, NL October 21, 2016 — In coordination with the Consulates General in Matamoros and Nuevo Laredo, U.S. Consulate General Monterrey concluded a series of six professional seminars – Free the Press – for journalists offered by U.S. experts. The seminars addressed over 200 distinguished journalists from the states of Coahuila, Durango, Nuevo Leon, San Luis Potosi, Tamaulipas, and Zacatecas. The series featured three virtual sessions and three traveling speakers who visited Monterrey, Saltillo, Durango, San Luis Potosi, Matamoros, and Nuevo Laredo.  Following the final session, each Consulate General hosted a reception and granted certificates to those journalists who participated in four or more of the six sessions. The series, which ran from May to October 2016, covered topics such as new journalism trends offered by Janine Warner (May 2016), social media strategies for reporters with Teresa Frontado (June 2016), technology and tools for reporters with Patricia Torres-Burd (July 2016), investigative journalism with Lynne Walker (September 2016), cyber-security with David Perera (September 2016) and high-risk coverage with Luis Botello (October 2016).   The Free the Press seminar series is one part of on-going efforts by the U.S. Mission to Mexico to support journalism, freedom of expression, and the professional development of reporters throughout Mexico.

Photos from the seminar series are available: Free the Press Seminar in Flickr