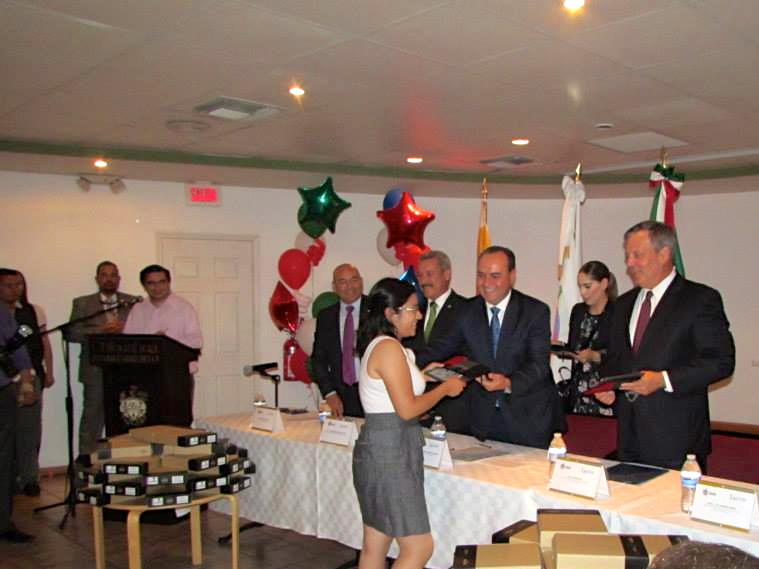 June 15, 2015 – The U.S. Consul General in Ciudad Juarez Ian Brownlee visited the Franklin Corner in the city of Chihuahua on June 15, where he presented a donation of 65 Kindles (electronic books) to 60 students with scholarships from the English Access Microscholarship Program and five teachers from the Chihuahua Autonomous University implementing the program.

In addition to the English academic component, Access also provides an introduction to American culture through summer camps and extracurricular activities. As part of the event, the Access participants had the opportunity to show what they have learned by interviewing the Consul General.  During the interview, Consul General Brownlee told them about his favorite food, his work at the consulate, the countries he has visited and his plans for the future.

Consul General Brownlee also encouraged the young people to continue learning and to apply in the future for exchange program scholarships to the United States saying, “with your English knowledge and your  understanding of my country’s culture, if you become ambassadors of Chihuahua, you can communicate what I’ve seen in this city since the first time I visited: Chihuahua is a city that is proud of its traditions, but never tired of learning and creating.”

The donated Kindles come preloaded with a selection of novels, short stories, biographies, and information on history, education and culture of the United States as well as English learning materials. These eBooks will also provide teachers with new tools.

Since its inception in 2004, approximately 95,000 students in more than 85 countries have participated in the English Access Microscholarship Program.  In Mexico, the program was launched in 2009 by the then Secretary of State Hillary Clinton with six groups in three states. More than 600 Mexican students have benefited from the program since its launch.  This is the first time the English Access Microscholarship Program is being implemented in Chihuahua.