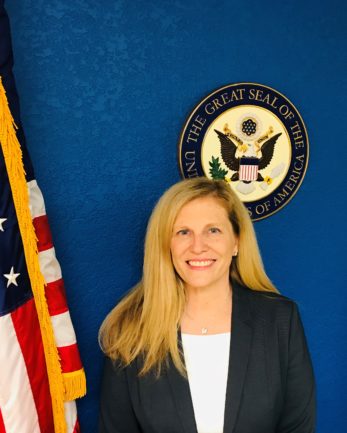 Virginia L. Staab is a career diplomat with the U.S. State Department since 2003.  She began her current posting in August 2017 as Consul General for the U.S. Consulate in Nogales, Mexico.

Prior to this assignment, she was the Director of International Narcotics and Law Enforcement Affair Section in Guatemala. She led the collaboration between the Government of the United States and the Government of Guatemala, community organizations and non-governmental organizations to improve the capacities of democratic institutions, anti-drug programs, anti-gang programs and youth support, as well as support for the justice sector reform.

Previously, she was the Public Affairs Officer of the United States Embassy in Lisbon, administering all the cultural and press affairs of the Mission and acting as the official Embassy spokesperson. Prior to this, Gini served as Deputy Spokesperson for the Western Hemisphere Affairs Section at the State Department in Washington, D.C.

Before joining the Foreign Service, she had a long career in the private sector as Marketing Director for an international, corporate law firm based in San Francisco. Prior diplomatic assignments include Bogotá, London, Lisbon and Washington, D.C. Gini is fluent in Spanish and Portuguese.  She was born in San Francisco, is married and has two children.

Normal Business Hours:
Monday through Friday from 8:00 am to 5:00 pm except U.S. and Mexican Holidays.