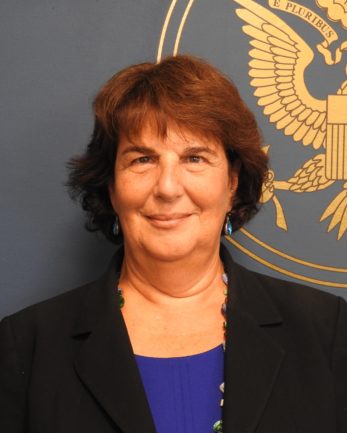 Robin Matthewman began her tenure as Consul General at the U.S. Consulate General in Guadalajara in September 2018.  She is a career member of the Senior Foreign Service with the rank of Minister Counselor.

Ms. Matthewman joined the Foreign Service in 1987.  Early in her career, she served as a Vice Consul in Mexico City, as Economic Officer in Costa Rica, and as Economic and Commercial Counselor in Moscow and Honduras.  She is a two-time Deputy Chief of Mission, having served in that position in both Uruguay and Costa Rica.  Her other senior positions include Minister Counselor for Economic Affairs in Iraq and Director of the Office of Mexican Affairs in the Bureau of Western Hemisphere Affairs in Washington.  In that capacity, Ms. Matthewman managed and coordinated U.S. policy with respect to economic, political, security, and border coordination between the United States and Mexico.

Ms. Matthewman has a Bachelor’s Degree in International Relations with a specialty in Economic Development from Georgetown University’s School of Foreign Service and a Master of Business Administration from the University of Washington in Seattle.  She also participated in the mid-career program at Princeton University’s Woodrow Wilson School. She is married to Jack Matthewman and they have three sons, Robert, Scott, and Andrew.