It was the valiant defense of Fort McHenry by American forces during the British that inspired 35-year old, poet-lawyer Francis Scott Key to write the poem which was to become our national anthem, “The poem was written to match the meter of the English song, “To Anacreon in Heaven.” “In 1931 the Congress of The United States of America enacted legislation that made” “The Star-Spangled Banner” the official national anthem.”

Oh, say can you see, by the dawn’s early light,
What so proudly we hailed at the twilight’s last gleaming?
Whose broad stripes and bright stars, through the perilous fight,
O’er the ramparts we watched, were so gallantly streaming?
And the rockets’ red glare, the bombs bursting in air,
Gave proof through the night that our flag was still there.
O say, does that star-spangled banner yet wave
O’er the land of the free and the home of the brave?

On the shore, dimly seen through the mists of the deep,
Where the foe’s haughty host in dread silence reposes,
What is that which the breeze, o’er the towering steep,
As it fitfully blows, now conceals, now discloses?
Now it catches the gleam of the morning’s first beam,
In full glory reflected now shines on the stream:
‘Tis the star-spangled banner! O long may it wave
O’er the land of the free and the home of the brave.

And where is that band who so vauntingly swore
That the havoc of war and the battle’s confusion
A home and a country should leave us no more?
Their blood has wiped out their foul footstep’s pollution.
No refuge could save the hireling and slave
From the terror of flight, or the gloom of the grave:
And the star-spangled banner in triumph doth wave
O’er the land of the free and the home of the brave.

Oh! thus be it ever, when freemen shall stand
Between their loved homes and the war’s desolation!
Blest with victory and peace, may the heaven-rescued land
Praise the Power that hath made and preserved us a nation.
Then conquer we must, for our cause it is just,
And this be our motto: “In God is our trust.”
And the star-spangled banner forever shall wave
O’er the land of the free and the home of the brave!

“Then, in that hour of deliverance, my heart spoke. Does not such a country, and such defenders of their country, deserve a song?…” 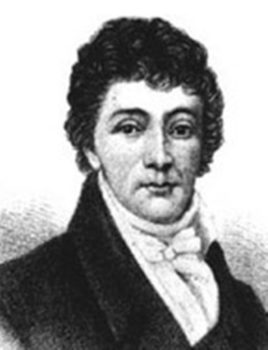 Francis Scott Key
Francis Scott Key, son of an established Maryland family, was born on August 1, 1779, in western Maryland (Frederick, MD) on the family estate of “Terra Rubra.” He attended grammar school and later graduated from St. Johns College in Annapolis at age 17.

By 1805, Key had established a law practice in Georgetown, Maryland, and, by 1814, had appeared many times before the U.S. Supreme Court. The site of his house on M Street is now a memorial park.

Key was a religious man and was involved in the Episcopal church. Although opposed to the war, he served for a brief period in the Georgetown Light Field Artillery (1813-14). During the Battle of Bladensburg, Key assigned field positions to American troops – a duty he had no expertise in!

In August 1814, Key’s friend Dr. William Beanes was taken prisoner by the British army soon after its departure from Washington. Key left for Baltimore to obtain the services of Colonel John Skinner, the government’s prisoner of war exchange agent. Together they sailed down the bay on a truce ship and met the British fleet. Key successfully negotiated the doctor’s release, but was detained with Skinner and Beanes by the British until after the attack on Baltimore.

Key’s vessel (name unknown) was 8 miles below the fort during the bombardment, under the watchful care of a British warship. It was from this site that he witnessed the British attack on Fort McHenry, after which he was inspired to write the words to “The Star-Spangled Banner.”

After the war, Key served as a United States District Attorney and continued his association with the Episcopal church, writing several hymns. On January 11, 1843, he died of pleurisy while visiting his sister in Baltimore. Today he rests in Mount Olivet Cemetery in Frederick, Maryland. The flag he so honored flies day and night here, and at Fort McHenry, as a reminder of those events in September 1814 that gave birth to our anthem and pride in our nation. (Note: There are also local monuments to Key at Fort McHenry, on Eutaw Place in Baltimore, and at the Presidio in San Francisco, California.)

Key was the brother-in-law of Roger Brooke Taney who served as Chief Justice and administered the oath of office to Lincoln in 1861.