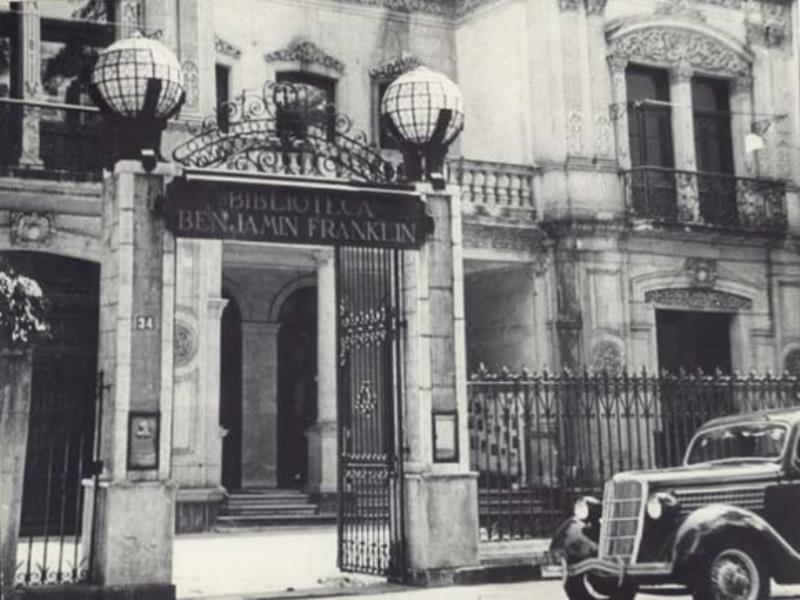 The Benjamin Franklin library first opened its doors on April 13th, 1942. It was inaugurated by then President of Mexico Manuel Avila Camacho and Mr. George Messersmith, Ambassador of the United States. The first building was located at 34 Reforma Avenue.  “La Franklin” was the first US library founded overseas, with assistance from the American Library Association. Retired New York Public Library Director, Harry Lydenberg, was in charge of the library opening with a collection of 4,000 books.

From the very beginning, “La Franklin” has been distinguished for presenting art exhibitions, concerts, films, and conferences. Frida Kahlo participated during the 1940s in an exhibition called “A Century of Portrait in Mexico.” Students, adults, and reading lovers gathered at the same time in the Library’s reading room. “La Franklin” was the first Mexican library to lend books to the general public.

The Library moved to its second location on Niza Street in 1952. In 1963, library visitors multiplied when public school students started looking for material on 20th century history after it recently became incorporated in secondary education curriculum.  In 1968, “la Franklin” moved to its third location on Londres Street. “La Franklin” serves as an intermediary for an interlibrary loan program between Mexican universities and the University of Texas. It was the first library to introduce a PC-networked environment in Mexico in 1988. 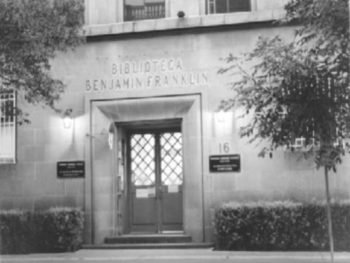 The library moved to its fourth and current location in 2003. Today the library has more than 20,000 volumes focusing on American Culture, English teaching, librarianship and bilateral relations in Mexico. The reference staff answers an average of 18,000 questions per year, produces special bibliographies, and Facebook information alerts. The cultural programs include conversation clubs, storytime sessions, concerts, game night and conferences with U. S. speakers. All the programs are announced on the library’s calendar of events

The English Language Office, EducationUSA, the International Institute of Education and COMEXUS work closely with the Library, to continue its tradition to promote mutual understanding and strengthen friendship between the United States and Mexico.