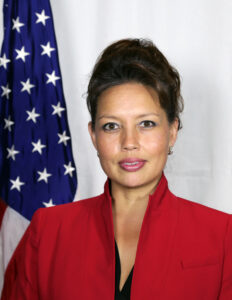 A career member of the Senior Foreign Service, Stephanie Syptak-Ramnath arrived in July 2021 for her third assignment in Mexico. In her role as Deputy Chief of Mission, she leads the Embassy, nine Consulates and nine Consular Agencies in advancing U.S.-Mexico bilateral relations. She coordinates the efforts of 38 U.S. government agencies in partnering with Mexico in the areas of migration, trade and investment, conservation, labor, law enforcement and defense cooperation.

Stephanie served as Chargé d’Affaires, a.i. at U.S. Embassy Singapore from January 2017 to July 2019, directing 19 U.S. government sections and agencies in the advancement of bilateral security, military, economic, and people-to-people cooperation. During that time, she led Embassy efforts in support of the historic June 2018 Singapore Summit between President Trump and Chairman Kim.

She previously served as Minister Counselor for Public Diplomacy at U.S. Embassy Mexico City, Deputy Chief of Mission in Bamako, Mali, and Senior Deputy Director in the Office of Public Diplomacy in the Bureau of European and Eurasian Affairs. Other assignments include Tunis, Tunisia, the U.S. Mission to the United Nations, and Monterrey, Mexico.

In November 2015, Stephanie was awarded the Department of State’s Edward R. Murrow Award for Excellence in Public Diplomacy.

Prior to joining the Foreign Service, Stephanie was an officer in the U.S. Navy. She was a member of the International Women’s Forum Leadership Foundation 2011-2012 Fellows Class, for which she completed executive programs at Harvard Business School and INSEAD.

She is a graduate of Georgetown University’s School of the Foreign Service and is married to Gautam Ramnath. They have two daughters studying at Northwestern University and Pepperdine University.