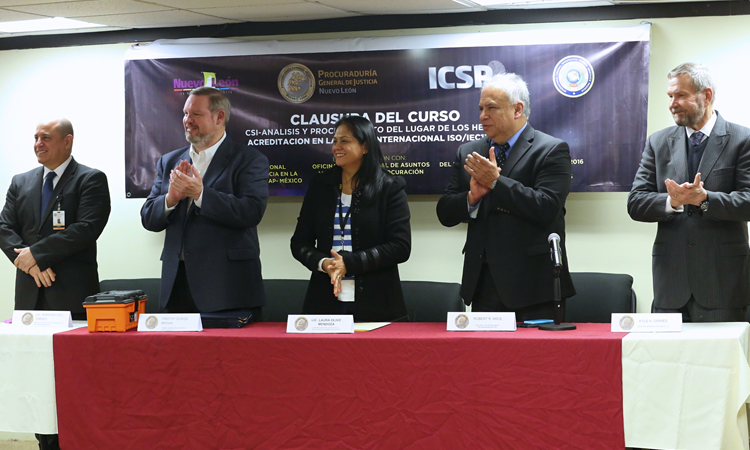 Under the Merida Initiative, the U.S. Consulate General in Monterrey and the Attorney General of the State of Nuevo Leon (PGJ) conducted the closing ceremony on December 9, 2016 for an analysis and processing of the crime scene training for over 190 Mexican investigation experts within the Attorney General’s Institute of Criminology and Forensic Services.

The PGJ investigators were trained for seven months to ensure the standardization of procedures and international best practices that support the field investigations of criminal activity within the accusatory criminal system. Diplomas to the graduates were given by the U.S. Consul General in Monterrey, Timothy Zúñiga-Brown, and Nuevo Leon’s Assistant Attorney General, Laura Olivo Mendoza. Consul General Zuñiga-Brown mentioned that during the course, the experts learned the fundamental competencies for law enforcement and the proper integration of a successful judicial case, including criminal analysis preservation of the crime scene and evidence, and preparation to present testimony in oral trials. The new accusatory system will create a justice administration that will be more just, transparent and efficient. However, for this to be a tangible result, all interested parts must maintain their commitment throughout this transition that might take many years to consolidate.

This initiative will support the agents in their line of work under the new accusatory justice system. The Mérida Initiative is a bilateral security cooperation agreement between Mexico and the United States.