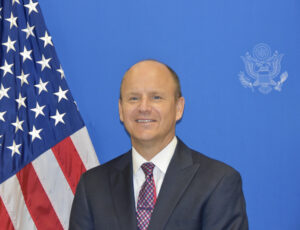 Thomas E. Reott is a career member of the Senior Foreign Service with 20 years’ experience in the Department of State, at both headquarters and overseas. He previously served as Minister Counselor for Economic Affairs at the U.S. Embassy in Mexico City.

In Washington DC, Mr. Reott served as Chief of Staff to the Assistant Secretary in the Bureau of Economic and Business Affairs and as Deputy Director in the Office of Afghanistan Affairs. In addition to Mexico, he has held overseas assignments in Spain, India, Colombia, Afghanistan, and in Belgium at the U.S. Mission to the European Union.

Prior to government service, Mr. Reott worked in the private sector, beginning his career at Procter & Gamble, and then helping to launch a start-up marketing company in Boston. From 1993-1995, Tom served as a Peace Corps Volunteer in Lithuania, advising entrepreneurs adapting to a post-Soviet, market-based economy. He holds a master’s degree in International Affairs from The Fletcher School of Law and Diplomacy and a bachelor’s degree in Finance from Miami University in Ohio.