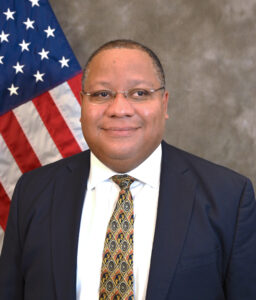 Roger Rigaud, U.S. Consul General in Monterrey as of August 2021. He is a career member of the Senior Foreign Service, rank of Counselor, and joined the Foreign Service in May 1998. He served his first tour as an economic and consular officer in Port-au-Prince, Haiti. He subsequently served consular management assignments in Madrid, Spain; Ankara, Turkey; and Ciudad Juarez, Mexico, and as a regional economic officer in Baku, Azerbaijan. Roger served as Consular Section Chief in Istanbul, Turkey, from 2015 to 2018 before returning to Washington. He completed a tour as the Consular Border Security Programs Manager in the Office of the Comptroller, Bureau of Consular Affairs (CA/C) before coming to Monterrey.

In the course of his career Roger received numerous Meritorious and Superior Honor awards from the Department of State. In addition, he was the recipient of the 2007 Secretary’s Award for Public Outreach, and the 2017 Barbara M. Watson Award for Consular Excellence.

Roger is a native of Brooklyn, New York, and a graduate of Georgetown University’s School of Foreign Service, where he earned a BSFS in International Relations, Law and Organizations. He completed a M.A.in Development Economics and Constitutional Law at the Fletcher School of Law and Diplomacy. Prior to joining CA/C, Roger completed a M.S. in National Resource Strategy from the Eisenhower School at National Defense University. He speaks Haitian Creole, French, Turkish, Spanish and Farsi. He is married to Ayse Okumusgil and they have a daughter.