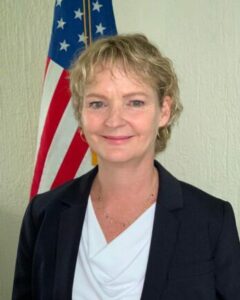 Prior to her arrival in Mexico in August 2020 as the Consul General to Guadalajara, Eliza F. Al-Laham was serving in the joint Executive Office for the Bureaus of Near East Asian Affairs and South and Central Asian Affairs as the Regional Programs Coordinator, conducting strategic planning for the overseas support platform that serves 30 diplomatic missions.  From 2018 to 2019, she was the Supervisory Post Management Officer where she coordinated a whole of government strategy in Iraq as well as the evacuation of three posts.  Earlier in her career, Eliza served as Human Resources Officer in the Iraq Support Unit in Amman, Jordan.

Managing operations at the American Institute in Taiwan and prior to that at the U.S. Consulate General in Shanghai, Eliza led preparations to move 500 employees into a new office compound and negotiated land acquisition with Chinese.  She continued to develop innovative Chinese language training programs that she had started in Washington as a Post Management Officer in the East Asia and Pacific Bureau.

Eliza’s entry level tours were as Assistant Cultural Affairs Officer in Cairo and Consular Officer at the Consulate General in Mumbai, India.  She joined the U.S. Department of State in 1997 as a local hire in Jerusalem.

Eliza has a Masters degree in Environmental Management from Duke University, 1996, and a B.A. in World Political Economy from Colorado College.  She speaks Spanish, Arabic, Chinese, and French.  Eliza is married and has three children.