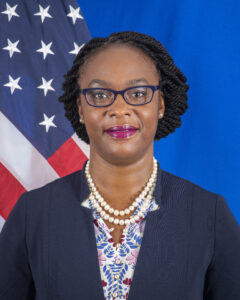 In Washington, she worked as a special assistant to former Under Secretary for Political Affairs Ambassador William J. Burns, as the Peru Desk Officer in the Office of Andean Affairs, and as a Watch Officer in the State Department’s Operations Center responsible for briefing and alerting then Secretary of State Condoleezza Rice and other senior officials on breaking foreign affairs matters.  In other domestic assignments, Dorothy was a Diplomat-in-Residence responsible for outreach and recruitment of diverse candidates from the Pacific Northwest region of the United States.  Prior to that she represented the Department of State as a National Security Affairs Fellow at the Hoover Institution, Stanford University.