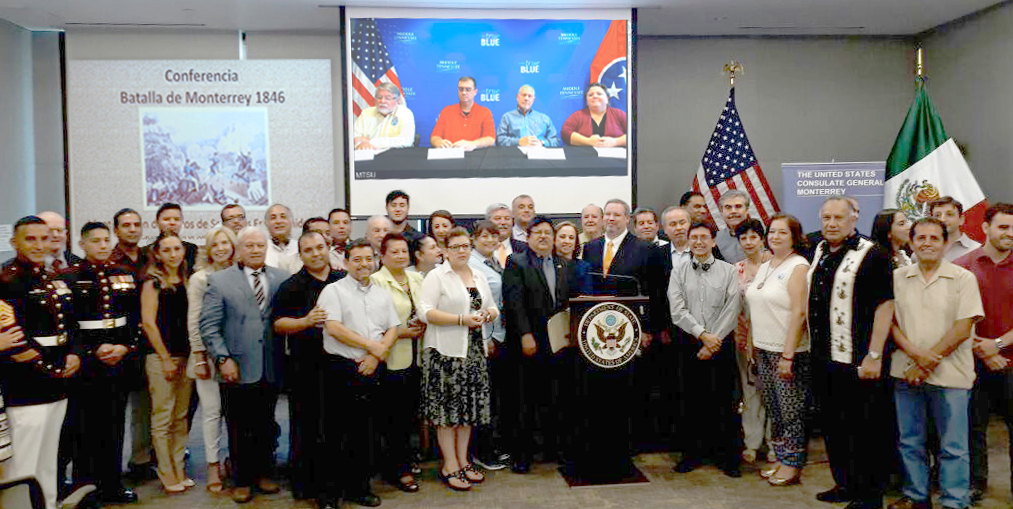 Monterrey, NL August 1, 2017 — The United States Consul General in Monterrey Timothy Zúñiga-Brown hosted a video conference with four U.S. experts who collaborated in the investigation to identify the remains of several soldiers of the 1846 Battle of Monterrey. Later, he offered a reception to historians, anthropologists and other Mexican colleagues who also collaborated in this project.

In September 2016, the Mexican and United States governments repatriated the remains of several U.S. soldiers who fought in the 1846 Battle of Monterrey. The remains were discovered during a construction project in Monterrey in 2011 and returned home on September 27, 2016. The preliminary identification was carried out by Mexico’s National Institute of Anthropology and History (INAH) and the system of medical examiners of the U.S. Armed Forces.

Experts from Middle Tennessee State University (MTSU) and Lipscomb University shared with their Mexican counterparts the techniques they used in the analysis of the remains they received in September 2016 and responded to questions from the fifty Mexican guest and media in attendance.

During the conference, the Consul General expressed the appreciation of the United States to the many Mexicans authorities who assisted with the identification and repatriation process, saying, “We are pleased to be the hosts of this exchange between researchers, anthropologists, forensic scientists, and historians, both Mexican and American, who have contributed crucially to this research. We cannot continue without recognizing once again the contributions of our partners in this project: the federal government of Mexico, the government of the State of Nuevo Leon, and the authorities of the Mariano Escobedo airport. But the indispensable and determining role was Mexico’s National Institute of Anthropology and History (INAH) and the system of medical examiners of the U.S. Armed Forces, who identified the remains.”