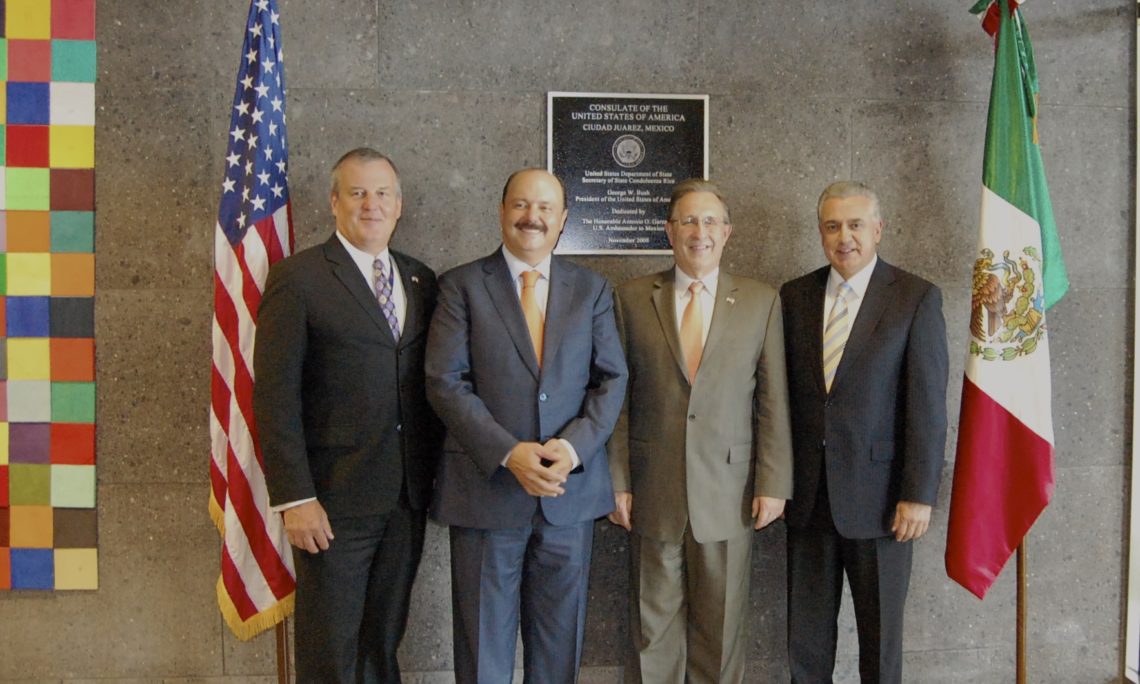 Ambassador Wayne appreciated the opportunity to discuss improvements in the security situation and praised efforts to foster economic development and educational exchanges in the cross-border region.

“A strong economy is a key to a stronger Chihuahua. We commend Governor Duarte and Mayor Serrano for their commitment to creating economic opportunities, and laying the groundwork for future economic growth.  The investment environment has been strengthened by important security achievements; work remains to improve the situation and to further strengthen the investment environment, and the United States will continue its efforts to work with Mexico to address our shared security concerns,” Ambassador Wayne noted.

In their conversation, they discussed the importance of justice reforms at the national level and how Chihuahua continues to be at the forefront of the reform with a pilot oral labor court operating in Parral and plans to expand oral court trials in the labor, civil, and family courts.

The Governor thanked the Ambassador for re-starting live cattle inspections in Ojinaga, Chihuahua. The Animal Plant and Health Inspection Service began inspections at the Union de Ganaderos facility in Ojinaga on June 23, 2014.

The Governor also raised the issue of Mexico’s energy reforms, and noted that it will lead to significant investment opportunities in the energy sector in Chihuahua, especially in shale gas.

“We will continue our work on shared opportunities for the betterment of the community, and we applaud the efforts of the Chihuahua State Government to invest in the continuation of several crime prevention programs originally funded by USAID,” Ambassador Wayne said. Since 2008, USAID has allocated approximately USD $50 million to support Government of Mexico and civil society efforts to strengthen communities nationwide. USAID efforts in Ciudad Juarez have focused on three target communities: Felipe Angeles, Francisco Madero, and Riberas del Bravo.

Additionally, the U.S. Embassy’s Office of International Narcotics and Law Enforcement Affairs, in partnership with civil society and educational authorities, has implemented various programs to enhance Culture of Lawfulness practices in Chihuahua, including producing teaching materials for school children in at-risk communities and developing a professionalization curriculum for teachers.

Ambassador Wayne and Governor Duarte also discussed the construction of the Guadalupe/Tornillo Bridge and talked about future infrastructure plans to connect the Guadalupe/Tornillo port of entry to the Chihuahua City-Juarez Highway.  This crossing will provide an important new option in the region for individual travelers and cargo, and when completed, will facilitate trade and contribute to North American competitiveness.

The Chihuahua Governor highlighted regional plans to construct an improved rail line connecting the future expansion of the port of Nayarit in Nayarit, through Chihuahua to Santa Teresa, New Mexico, which he emphasized would expand trade flows throughout the region.

Governor Duarte, Mayor Serrano and Ambassador Wayne also talked about the importance of continuing to invest in educational exchanges which will prepare today’s students to be tomorrow’s leaders.

“We intend to provide educational opportunities to all our youth. Education is the State Government’s bet to tackle security. If we get youth off the streets and offer them better opportunities, we are not only contributing to a better economy, but to a peaceful state,” said Governor Duarte.

Since 2001, the State of Chihuahua has granted nearly 1,000 scholarships for students to attend the University of Texas at El Paso and is currently discussing the establishment of a similar program with authorities in New Mexico. For its part, the U.S. Consulate General in Ciudad Juarez has organized three college fairs: two in Ciudad Juarez and one in the city of Chihuahua over the past two years, helping to strengthen and expand educational partnerships between Mexico and the United States.  Efforts such as the Bilateral Forum on Higher Education, Innovation and Research, the U.S. government’s 100,000 Strong in the Americas initiative, and the Government of Mexico’s Proyecta 100,000 are resulting in programs such as the one that is enabling sixty Mexican students to spend their summer at the University of Texas at El Paso as part of two ambitious programs promoting scientific research and immersion in the English language.

As part of his visit to Juarez, Ambassador Wayne had the opportunity to tour downtown Ciudad Juarez accompanied by Mayor Serrano, where he learned about the efforts of the government to redevelop the area. He visited the Mision de Guadalupe, the Museo de la Revolucion en la Frontera and the Garita de Metales building. The Garita was restored in part through the Ambassador’s Fund for Cultural Preservation. Ambassador Wayne stated, “The public investment that the Municipal and State Governments — with the support of the private sector — are making in Juarez is notable, but more important is that the community is recovering its public spaces.”

The Ambassador’s Fund for Cultural Preservation helped refurbish the historic Garita de Metales building after a fire damaged it in 2010. A USD $50,000 investment was matched by the Patronato de Amigos del Museo and Chihuahua Government funds. Chihuahua State authorities have pledged to use the building to maintain a historic music/radio/news archive (fonoteca).